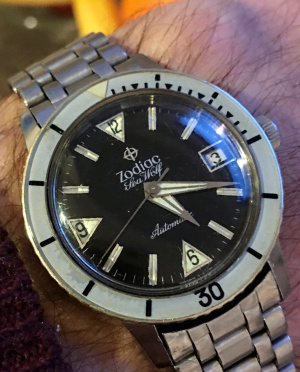 several big names of the watch industry claim to have been the first to develop a dive watch and so far no agreement has been reached. Rolex insists on having invented “the first waterproof and dustproof wristwatch [which] marked a major step forward” while Blancpain declares the year 1953 the “creation of the first modern diver’s watch” thanks to its Fifty Fathoms (although Zodiac SeaWolf owners might argue with that) and Omega boasts about having “created the first true dive watch.

Although the first efforts to waterproof a watch were already made in the 17th century, no real progress was made until three centuries later. In the beginning of the 20th century, water was still one of the biggest enemies of the watch (together with dust, shock, magnetic fields, and general abrasion).

Hans Wilsdorf, the founder of Rolex, would play a remarkable role in the development of the dive watch – and change the course of watch history – it could be called the genesis of the modern diving watch. In 1926, the ambitious genius developed a wristwatch that was waterproof as well as dustproof thanks to its winding crown, bezel, and case back that could be screwed down against the middle case, heralding a new era: a century of unstoppable development that finally lead to the wide range of watches that accompany divers to the most spectacular and mysterious parts of the oceans.

This Rolex watch named an Oyster – the forefather of today’s famous Rolex Oyster collection – was put to the test on 7 October 1927 when British endurance swimmer Mercedes Gleitze who attempted to cross the English Channel. During this daring swim, she wore the Rolex Oyster on a chain around her neck. The public was certainly surprised when the watch not only survived more than 10 hours in the freezing water, but still worked with a precision and accuracy that was astonishing, making it the first water-resistant watch in history.

The Compressor and Super-Compressor watch cases designed by ESPA revolutionised the civilian dive watch in the 1960s and it spawned hundreds of different versions by many companies that have become very collectible. Read more at EPSA Super-Compressor. 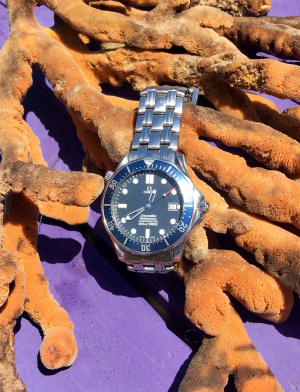