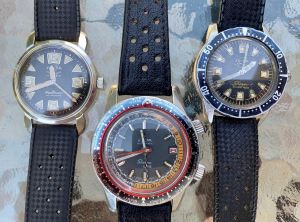 The Racine family, based in the Jura, was a well-known family of artisans. For many centuries they were involved in arts and craftsmanship. On October 1, 1913 Ariste Racine (1889 - 1958) and his wife Emma Blatt started a 'Manufacture d'Horlogerie Ariste Racine' in the Rue du Crêt 24 in La Chaux-de-Fonds. As the name 'Racine' was already a trademark, registered since 1870 by Jules Racine Sr., Emma Racine-Blatt proposed an anagram (or levidrome) of the family name: 'ENICAR'. Ariste Racine registered his manufacture and that brand name on January 6, 1914. 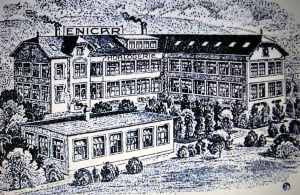 Oskar Racine, Ariste's brother, joined the company in 1918. He owned a shaft factory in Biel, which he closed down in May 1930. Both Ariste and Oskar were brilliant salesmen and were quite ingenious. On April 11, 1932 the company was named ENICAR Société Anonyme (equiv. to Ltd.), with a nominal capital of 50,000 Swiss Francs. In 1934 Ariste Racine Junior, son of Ariste and Emma, entered the company and as per October 30, 1939 he became general director.

ENICAR did good business with many military forces all over the world during both World Wars. After W.W. II ENICAR had to focus on non-military models. Ariste Racine Jr. was ready. In 1953 a new factory and high end laboratory in nearby Oensingen was opened, where all the movements were 'ultrasonically' cleaned. A new modern method that was printed or engraved on all watches as a marketing tool. ENICAR was also able to epilamize (= avoiding oil to run on) surfaces of its movements which reduced wear and service costs and enhanced reliability.

Modern production methods were introduced and sales rocketed. In the early 1950's over 70,000 movements were produced annually. ENICAR developed interesting watches, which were sturdy and reliable. On July 16, 1954 ENICAR received its first 'Gangschein' (certificate of accuracy) of the Neuchâtel forerunner of the COSC (Contrôle Officiel Suisse des Chronomètres = Swiss Official Inspection of Chronometers; founded in 1973) for its 1010 Caliber.

A waterproof wrist watch with a newly developed case (with bayonet lid) was introduced as 'Seapearl' in 1955; its back has an engraved open oyster. 'Seapearl' was registered as a trademark on April 10, 1953. 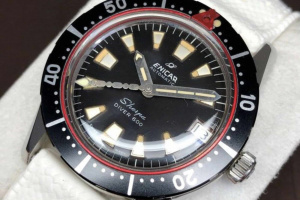 In 1956 the first automatic winding chronometer (based on Felsa 1560 Caliber) was introduced. Three years later ENICAR was able to produce its own automatic caliber (1125). Caliber 1125, 1126 and 1127 were offered as 'Rubyrotor' with 33 Jewels. Most movements for ENICAR chronographs (e.g. Valjoux 23, 72 and 92) were bought elsewhere. Alarm watches were bought in from Adolph Schild or Lemania.

On May 18, 1956 a Swiss expedition reached the summit of the Lhotse Mountain (8,516 meters) in the Himalayas, followed by the summit of the Mount Everest (8,848 meters) four days later. All expedition members were wearing ENICAR Seapearl watches. They all turned out to be very reliable - as the Nepalese sherpas were - which led to the brand name ENICAR Sherpa. That name was registered on November 6, 1956. From that moment on many Sherpa varieties (over 100 different designs) were introduced. The top wrist watch was the Sherpa-Graph as worn by Jim Clark and other racing drivers of the 1960s.

In 1961 the first electro-mechanic watch was introduced. Marksmen, participating in the 1964 Tokyo Olympic Games, were wearing ENICAR watches. In 1965 the 'Star'-collection followed. Many Star models were the successors of the Sherpa models: Sherpa Dive became Star Dive.

Unfortunately like many other Swiss watch makers facing the Quartz crisis, ENICAR was suffering great losses, which led to the presentation of a bankruptcy petition against the company on November 13, 1987. On that date the official receiver of the Court in Biel/Bienne, was informed that all material in stock and the brand name were sold to 5 creditors. On February 8, 1988 the brand name was sold by auction; the remaining watch cases were sold to a German manufacture (Mr. Gerd-Ruediger Lang, owner of Chronoswiss). An investor in Hong Kong bought the brand name. 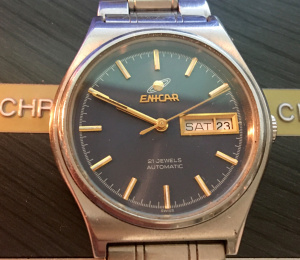