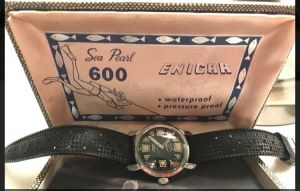 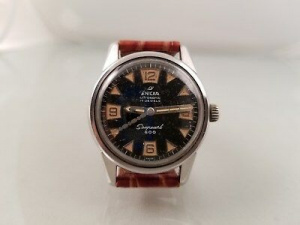 In the late 1950s, the U.S. Navy’s Experimental Diving Unit (NEDU) was assessing a number of "submersible wrist watches" for use by its Underwater Demolition Team divers, a unit that would later become known as the Navy SEALs. The preference was to go with an American watch company as supplier, and the Navy provided specifications to Bulova for a "standard USN watch." But while Bulova was developing that watch, NEDU decided to evaluate three commercially available dive watches to make a recommendation for use. The Enicar Seapearl 600 was popular with Navy divers at the time and many were in (non-issued) use by divers, so the Navy included the Seapearl 600 in the tests as well.

The rigorous tests they ran were on three watch manufacturers - a Rolex Submariner 6538, an Enicar Sea Pearl 600, and a Blancpain Fifty Fathoms. The resulting test report (Project NS 186-200 Subtask 4, Test 43, 15 July, 1958) passed judgment on the three watches. Of the three, it was the Blancpain alone which passed, meeting all criteria. The Enicar was finally rejected on the basis it did not have a rotating countdown bezel. However the report also mentions the excellent luminosity of the “gaudy and strange looking” dial and hands, but states that it was “well above the safe industrial limits of radioactivity.”

The stainless steel case is an EPSA Super Compressor case with a bayonet style back closure. The earlier versions are pre-Super Compressor, though they too utilized a bayonet closure. The Seapearl measures 34.6mm wide by 42mm long with 18mm lugs. There are two different lug variations–one with the angled lugs, and another with more rounded ornate lugs. The crown is a classic oversized EPSA crosshatched type, signed with the Enicar Saturn logo.

The dial is a glossy black, with large lume-filled indices. The 12, 3, 6 and 9 are large trapezoid lume plots with metallic numerals inside, and the other hour markers are smaller lume triangles. Each hour marker is outlined in steel or silver metal. Some dials have a black space between the lume and the outline, and some do not. The dial is signed “Enicar” over their trademark Saturn logo below the 12, along with “Ultrasonic, 17 jewels.” It is signed “Seapearl” in an ornate script above the 6, along with “600,” and signed “Swiss” below the 6. All of the lume is Radium.

As with the case, there are several variations of the dial. Most of the variations have to do with the text, where some feature “Seapearl 600” inside of a box, and some with the “Sherpa” name above that box. There are also versions without the Saturn logo.

Earlier models feature hands that are broad flat steel with pointed tips and narrow lume filled slots. The second hand is quite unusual–a fancy candlestick style with a lume-filled tip. The earlier versions had fully lumed hands, including the second hand, a detail that the Navy liked as it really added to the underwater visibility. There are later models with rectangular baton-style steel hands, similar to those found on the Enicar Sherpa Divette Super Compressor model.

The Seapearl 600 is powered by a 17-jewel manual wind AR 1120 movement, known to be robust and reliable. The AR stands for Ariste Racine, the founder of Enicar (Racine spelled backwards). The AR 1120 beats at 18,000 bph, with a respectable power reserve of 47 hours. Really early versions of the Seapearl were fitted with a cal. AR 1010. 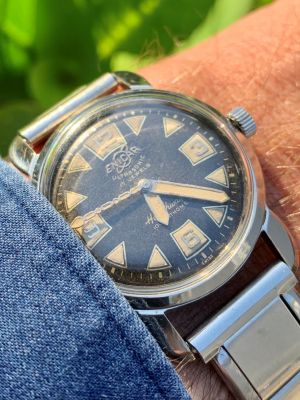 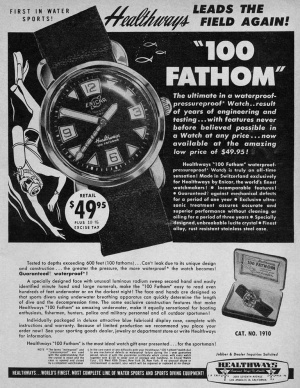 One rare variant is the Healthways 100, a Seapearl 600 that was co-branded with Healthways, an early scuba gear manufacturer. This one had the more ornate lug design (turtle neck) and was signed “Healthways.” There seem to be two dial versions, reading 100 FATHOM and 100 FATHOMS. These were sold circa 1955-56.

See the Enicar Sherpa Diver 600 for the next chapter in this story.