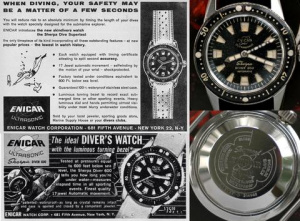 The 1958 model Diver 600 is 36mm diameter and has a Caliber AR1034 movement. The 0/60 marker on the bezel is narrow, and there are large dots at 15,30,45 and 60 (two dots) on the bezel. The hands have a broad lume applied. This and other early models did not have the red rotating ring between the crystal and bezel, which was added later.

1959 Diver 600 does not have the word automatic on the dial, although some models did. It has an AR1034 movement. The red ring between the crystal and the rotating bezel is still not present. The bezel has a broader red marker at the 0/60 point, and the large dots have been removed. The lumes on the hands are now narrower, perhaps in reaction to the liberal use of radium in the earlier model. Diver models do not have 30 marked on the rotating bezel. 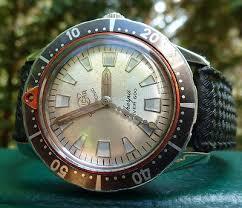 Enicar logo on dial changes with name beneath Saturn, but has the same style hands with thin lumes, but features Automatic on the dial.