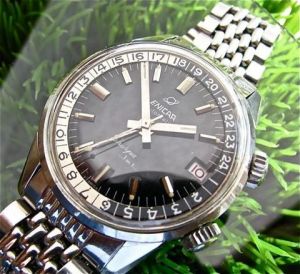 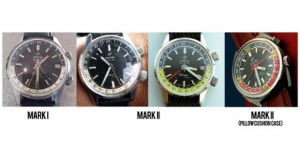 The other models in the two crown Pilot Watch range are the Jet and the Super Jet. The outer rotating bezel was removed.

The early Jet models coincided with the Mark IIB Guide models and had baton hands with inverted T lumes at the tip, a second hand with a yellow lollipop dot, and indexes with dot lumes on 6, 9, and 12 and rectangular lumes on the 5 minute indexes. The GMT hand was a thin yellow tipped pointer. Early models had an applied Saturn logo and T or Swiss T on the dial. Later models had automatic lower on the dial with T < 25 mc and T Swiss Made T on the dial. 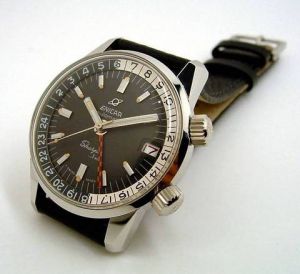 About 1969 a new model Jet was released coinciding with the Mark III Guide.

The baton hands have a thin pencil central lume on the minute hand and a lozenge lume on the hour hand, and the 24h hand is rallye style. The lume dots are reversed from the prior version. Thicker crowns were used. The case became a Supercompressor Sherpa 600, with model number 148.35.02 engraved.

Enicar Sherpa Jet 148-35-02 models from about 1973 feature a thin triangular pointer second hand. Both white and black dials were available.

The Jet 33 model featured both baton hands of the Mark I Jet and paddle lollipop hands. The indexes are thinner and the broader indexes at 6, 9 and 12 are grooved. It featured a Seapearl oyster back, engraved model number 126/002 and the movement is AR1126 33 jewel Supertest. The word Automatic did not often feature on the dial. 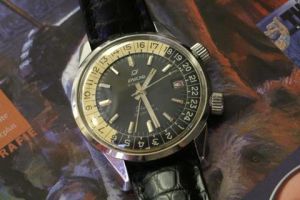 The Super Jet was a larger version of the Jet, released at the same time and was 40mm diameter with a calibre AR166 movement.

The earliest version was 1964 and the indexes and lumes are similar to the 1965 Mark II Guide shown above. Baton hands, and lollipop dot second hand.

This version of the model has fluted wide indices at 6, 9 and 12 and dot lumes at the 5 minute indexes. A unique lollipop paddle hand model is shown below. Thin second hand without a lollipop dot. Model 126/003 and 33 jewel SuperTest movement. 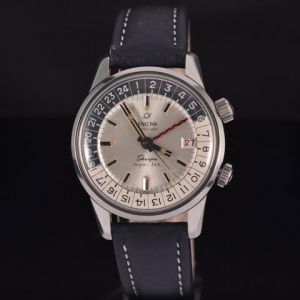 This model has the broader fluted indexes at 6,9, and 12 as for earlier 33 models.

This is now a cushion, pillowcase or short lugged style, with a multicoloured 24h bezel, and the date window is at 6 o’clock. This model now has 2 rings on the Saturn logo.