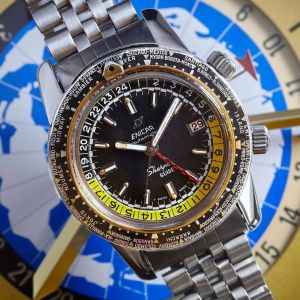 The Sherpa line from Enicar was introduced in November of 1956, after an Enicar was used in a summit of Mount Everest; henceforth, all of its explorer or tool watches bore the Sherpa moniker. With a Sherpa Date, a Sherpa Diver, a Sherpa GMT, and Sherpa World Timer all having at one point been in production, it seems logical that Enicar sought to combine all these functions into one impressive tool watch. Largely black, with the yellow portion of the GMT track meant to indicate day, white accents on the bezel and the dial, and the interesting addition of a rally-style GMT hand, this watch was clearly intended to be highly legible. 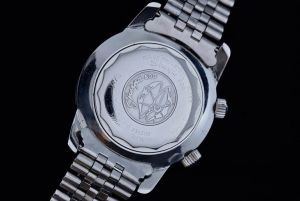 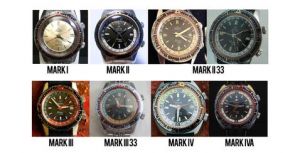 THE MARK I GUIDE 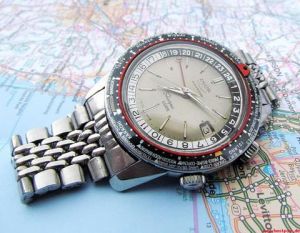 The larger size of the Enicar Sherpa Guide allows for a wider bezel, with fewer cities and division markings inside the city names. There is now a black and white internal rotating 24 hour bezel as well. The hands are still Dauphine style, but the feature is a half moon style 24h hand. Then there was a transition in branding to the logo with ENICAR below Saturn. The Mark I Guide used an AR1126 cal movement. The Rubyrotor calibre was introduced by Enicar in 1962.

This second version of the Guide no longer has the crescent moon 24h hand. This model has baton hands with lumes at the end, but now features a thin 24h hand, and a second hand with a round lollipop dot. Black and yellow coloured inner rotating 24h bezels are more common than black and white as in the earlier model. The index markers are now wider and have Tritium dot lumes at 6, 9 and 12 and rectangular lumes elsewhere. The crowns are becoming wider than in earlier models.

The early Mark II guide had a Seapearl oyster back engraved 146/001 referring to the AR1146 movement. Some had T Swiss on the dial rather than Swiss Made, and the word Automatic appeared in various positions on the dial. 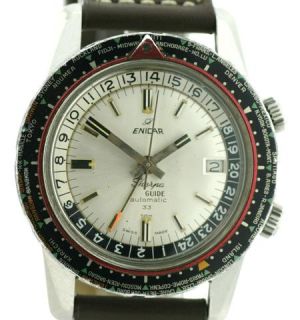 This Mark III model dates from about 1968. This has either a thin triangle shaped second hand or a lollipop second hand, a rallye style 24h hand, baton hands with a long pencil lume in the center of the minute hand and a broader lozenge shaped lume in the hour hand, and variously coloured inner bezels. The crowns are all thick.

The next version of the Guide from 1969 has the cushion, pillowcase or short lug body shape and the caliber AR166. Model 166-35-04. Enicar Sherpa 600 oyster case back. Multi-colored inner rotating 24h bezels are utilised, and the rotating ring between the crystal and the outer bezel is now orange rather than red. The 6,12,18 and 24-hour markers on the 24h bezel are black.

The next version had different lumes at the indexes and a new Saturn logo with 2 rings on Saturn. The lumes at 3,6,9 and 12 are trapezoidal, and rectangular elsewhere. The checkered chapter ring from the Mark IV Guide has been dispensed with. Both short and long lugged cases were available. Features the Cal, 166 movement, model number 166-35-04.