Difference between revisions of "Omega Speedmaster 125" 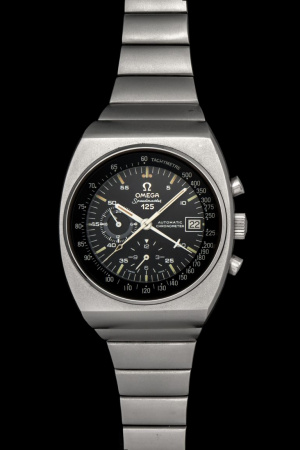 The calibre 1040 was the first self-winding chronograph movement used by Omega and calibre 1041 was chosen for and only used in a commemorative edition celebrating the company's 125th anniversary. See Omega Speedmaster 125. Exclusively produced for Omega by Lemania.

Some watches have codes with letters and numbers stamped on the caseback. Most do not so it not easy to establish total numbers made. The codes appear to start with a single letter - from A to L except J which has not been seen in public. The initial stories of 2000 made has proved inaccurate. Observational data reveals that all Speedmaster 125s with an alphanumeric engraving have lower (earlier) serial numbers. Watches with codes on the back all have serials beginning with 35.07x.xxx or 35.59x.xxx, while ones without codes are observed in many other serial batches as high as 40.92x.xxx. The Speedmaster 125s with alphanumeric codes were produced in the four initial batches of Speedmaster 125s, from June through September of 1973. Over 11000 unnumbered Speedmaster 125s (without codes) were manufactured from 1974 through 1978, well into the era when caliber 1045 supplanted the 1040 as OMEGA’s automatic chronograph caliber of choice and therefore it estimated approx. 17,400 125s were sold. 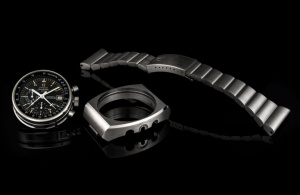 The Speedmaster 125 was special. as seen in the specifications.

This watch was also worn in space, where zero gravity must have helped combat the huge size of it! Read here for more on that story

For a much more detailed review of this watch see https://speedmaster125.com/