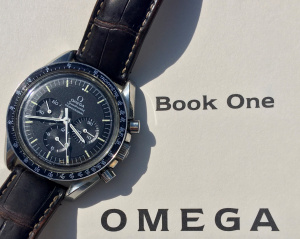 The watch that has launched so many vintage collections! It was the inspiration for the founder of Chronopedia. Simple, functional, useable, an everyday classic and still attainable brand new from Omega (in a slightly changed format). Everything you want from a watch, in one small beautiful package.

Every serious watch collector wants a Speedy Pro, and the choice and variety since it was first launched in 1957 is astonishing. The history of the Moon Watch is almost mythic...but here it is.

Early History of the Omega Speedmaster 1957-63 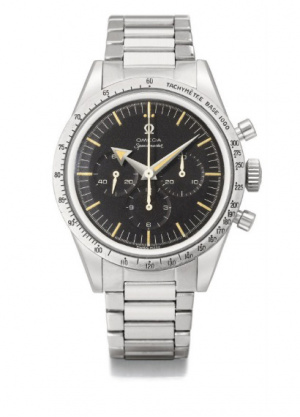 The Speedmaster's history goes back to 1957 when it was introduced as a sports and racing chronograph, complementing Omega's position as the official timekeeper for the Olympic Games.

The "Speedmaster" name was chosen for its tachymeter scale bezel and following the Omega convention used for other models like the Seamaster - initially the Speedmaster was part of the Seamaster line - and the Railmaster.

This first Speedmaster model - reference CK 2915 also known as the "Broad Arrow"- was designed by the Swiss Claude Baillod and was already featuring some of the hallmarks of the model: the triple-register chronograph layout, the high-contrast index markers, and the domed Plexiglas crystal. The dial was an example of perfect balance and proportions. The model had straight lugs, broad arrow hands and the bezel was in steel with engraved black print. The case diameter was 39 mm.

The movement of choice was the Calibre 321 that was introduced in 1942 as a joint project between Omega and Lemania, one of Omega's subsidiaries at the time, who supplied it as an ebauche (Lemania cal. 2310). Calibre 321 is recognised as one of the best example of lateral clutch, column wheel controlled chronograph and it was used as a base movement by Breguet, Patek Philippe and Vacheron Constantin in a variety of chronographs. In 1946, the movement was further enhanced by adding protection to magnetic fields and shocks, something that later will prove to be very important to pass NASA tests. 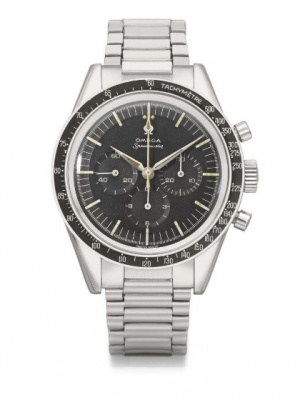 In 1959, a second Speedmaster version - the reference CK 2998 - was released with alpha hands and a black aluminium bezel to improve readability. The case diameter was expanded from 39mm to 40mm and, for the first time, Omega added the so called O-ring gasket around the push buttons to improve water resistance.