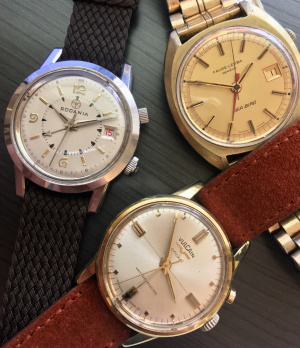 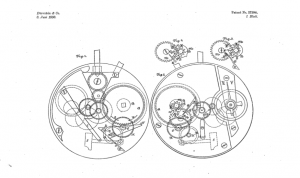 There are individual alarm pocket watches dating back to the 17th Century and water clocks going back even further but it wasn't until 1899 when the Durrstein brothers patented the first mass-produced movement with an alarm complication. The large size of a pocket watch caliber allowed the brothers the freedom to use an extra large main spring that could power both the timekeeping of the watch and the alarm complication, which at full charge could chime for thirty seconds.

The basic architecture of the alarm complication was now set for the next one hundred years; an independent alarm hand could be set to any time in a twelve hour period and was connected to a notched cam underneath the dial. When the desired time was met, the cam activated a lever, releasing energy from the mainspring to power a hammer to strike against a membrane creating sound. The alarm would ring, the time would be reset, the mainspring wound and the process would repeat. The alarm complication is different from a sonnerie or minute repeater despite the commonality of using sound to announce time. A sonnerie is a non-actionable complication that chimes the hour and quarter hour regardless of input from the wearer and a minute repeater is an actionable complication that chimes the hour and exact minute when the wearer activates the complication. In comparison, an alarm is a semi-actionable complication as the user initially sets the alarm time but has no input until the alarm chimes and then, depending on the watch, they can stop the alarm from chiming. Whilst a sonnerie and minute repeater use pitched bells to differentiate from hours and minutes, an alarm has a single, continuous pitch no matter the announced time.

Improving upon the original method of a setting key, the alarm was now controlled by rotating the bezel until the alarm hand aligned with the intended time. Four years later, Eterna would patent a bi-directional bezel and in 1914 would produce an alarm wristwatch based off the Durrstein's caliber however the small size of a wristwatch case presented problems: a smaller mainspring reduced the alarm time to just seven seconds, the bezel was likely to get knocked causing the alarm time to change and alarms vibrations caused problems with the accuracy of the movement. There were other attempts to create alarm wrist watches with one rather creative method of having the watch strap tighten against the wrist to alert the wearer. Needless to say this method did not catch on and it wouldn't be until the 1940's when real advancements were made. 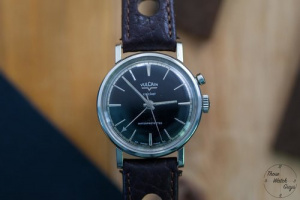 Vulcain had been working on a wrist watch alarm since 1942 and aimed to solve the problems of previous attempts. Instead of comprising on the alarms length by using only one mainspring, Vulcain fitted a separate spring in the movement that would solely power the alarm and by rotating the crown in different directions, the winding stem would switch between the different barrels instantly.

To increase the volume of the alarm, the hammer would strike a pin connected to a metal membrane that would act as a resonator. This membrane was covered by an outer case with sound holes, similar to that on a cello, that allowed the sound to escape. A pusher at 2 o'clock would allow the user to stop the alarm once they were alerted, rather than letting it run down. The watch was called the Vulcain Cricket as the hammer would strike up to 1300 times in just 25 seconds to create a very distinctive mechanical chirping sound.

Released in 1947, the Cricket became a huge success with Vulcain releasing several variations over the years such as the Golden Voice, a smaller watch made for women with a gold membrane that maintained excellent sound despite a smaller size. The new Caliber 401 released in 1958 added a date and subsidiary seconds but was never as popular as the addition of the date window meant there was no room for a second barrel which decreased the alarm time and increased the cost. The Vulcain Cricket Nautical released in 1961 was a diver’s alarm watch which added a set of adjustable decompression tables on the dial and had sixteen sound holes on the case back so even underwater the alarm could be heard.

Newer, and technically superior, alarms might have overshadowed the Cricket if it weren't for the White House News Photographers Association giving President Truman a Vulcain Cricket as a parting gift when he left the White House in 1952. His successor, Dwight Eisenhower was seen also wearing a Cricket however it was Lyndon Baines Johnson who truly cemented the Cricket as the President's Watch. Johnson was the only President to actually buy the watch himself and even purchased two hundred whilst in Geneva as gifts for staffers and guests. 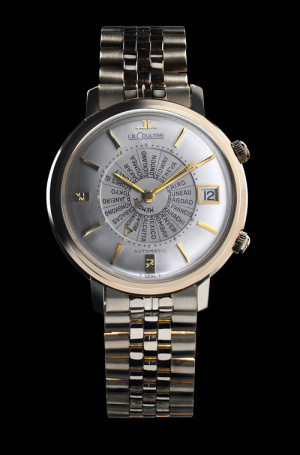 The Jaeger leCoultre alarm watch, Memovox, had been released in 1951 with the manual wind Caliber 489 and had a distinct look with two crowns instead of a pusher and crown; one crown controlling the time keeping and the other the alarm and rather than a pointer hand, the alarm was indicated by a rotating disc in the center of the dial. In 1956 Jaeger-LeCoultre released the Caliber 815, the first automatically wound alarm wristwatch, where a 'bumper' rotor wound the mainspring whilst the top crown still wound the alarm spring separately.

Later Jaeger-LeCoultre added a date module to 815 and that new movement, the popular Caliber 825, went into the new Memovox Worldtime which was created to celebrate the brand's 125th Anniversary. Two Worldtimes were sent to President Johnson, both cased in 14kt yellow gold with the seal of the President on the case back, in the hopes of usurping the Cricket. Johnson accepted the gift but it didn't weaken his love for the Cricket and he gave away one Worldtime as a gift and donated the other to his Presidential Library after his term ended.

Whilst JLC didn't win the wrist of the President, their Memovox case design proved quite versatile and over the next few years they released two divers alarm watches, the Deep Sea Alarm and the Polaris. These two watches had the same case as the Vulcain Cricket which was developed by Ervin Piquerez in 1956. Whilst it's fairly easy to find a regular dress Memovox, even if you do have to be careful about inner dial replacements, finding a Deep Sea or Polaris in good condition is challenging with less than a 1000 Deep Sea alarms ever produced. Not only that but these watches were professional tools that were used and abused and knocked against dive tanks for years so many didn't survive. 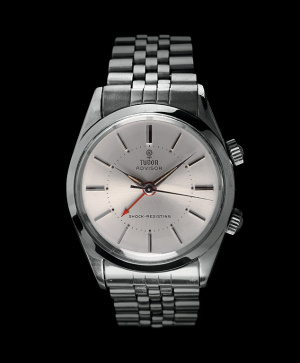 Released in 1957, the Tudor Advisor used an ebauche movement, an undecorated and dissembled movement, from Adolph Schild S.A. (rather than an in-house caliber like the Vulcain or Memovox) which whilst smaller, did not have the same length or volume of alarm.This same movement was used in over 450 different alarm watches during the 1950's and 1960's with examples from Bulova, Gruen, Omega and many more. It took until 1968 for Tudor to stop using the Oyster case, which whilst iconic is not designed for acoustic performance, and start using a new case with a sound enhancing back (something that the Cricket had been doing since 1947). The Advisor never had the fame of the Cricket or the Memovox because for most of the twentieth century Tudor have been seen playing second fiddle to Rolex.

Editor's Note: This article was first published in Arabic in the November/December issue of Alam Assaat Wal Moujawharat.