Vulcain was founded in 1858 in La Chaux-de-Fonds, Switzerland by the Ditisheim family. In the family studio, Ditisheim made pocket watches, which he sold under his own name. Through to the end of the Century, the watchmaker was called "Manufacture Ditisheim". In 1894, watches were first offered under the branding of Vulcain, with the company now under the leadership of Maurice Ditisheim's son, Ernest-Albert Ditisheim. In 1900, Ditisheim registered the name 'Vulcain' as a brand name for his pocket watches, naming it after the Roman god of Fire.

Up until World War II, Vulcain solely focused on the production of Pocket watches, only turning to wristwatches with the uptake in popularity of wristwatches for the military.

In the early 1940s, Vulcain invented the idea of a mechanical alarm watch. There had been two prior attempts by other watchmakers in the early 19th century, but these projects were failures. In 1942, Vulcain had begun production of a prototype alarm movement, later named the 120. The Caliber 120 could sound for above 20 seconds when fully would through the invention of the 'dual barrel'. This system ensured two separate barrels, which contain the wound up springs generating energy for the watch. These barrels separately provided energy for the movement, and for the alarm; hence ensuring that the watch could sound for significantly longer than prior iterations.

The development of the volume, developed alongside Paul Langevin took a further 5 years, when Vulcain patented a double-case design to reverberate the sound further. The sound of the alarm notably sounded similar to that of a cricket, with the insect serving as its namesake. 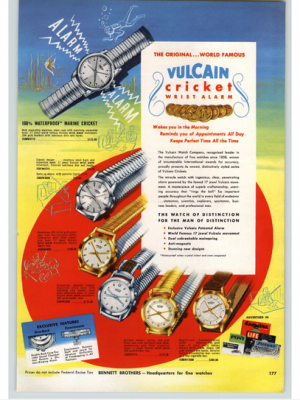 The Vulcain Cricket, released in 1947, ran off of the final iteration of the Caliber 120, which was 17 -Jewels, had a near two-day power reserved and beat at 18,000 Beats per hour.

In 1953, The White House Press Photographer's Association presented Harry S. Truman with a 14k gold version of the watch on the eve of his leaving presidential office. Following from this, nearly every President has been gifted one to commemorate their leaving office. See The Vulcain Cricket and The President. The Cricket also served as an adventurers watch, as the brand in Le Locle had partnered with multiple mountaineering and maritime expeditions.

Vulcain introduced the Cricket Nautical in 1961. The watch alarm was marketed as being audible underwater.

In 1961 the companies Revue, Vulcain, Buser and Phénix merged to form the "Manufactures d'Horlogerie Suisse Réunis SA" (MSR). During the quartz crisis in the 1980s, Vulcain struggled as the market for high-quality luxury mechanical wristwatches collapsed. The future was seen to belong to cheap quartz watches. Vulcain still produced their watches for sister brands within the MSR, but had a temporary break in manufacture.

This new beginning was associated with the relocation from La Chaux-de-Fonds to Le Locle, known for its association with the watch industry. In 2002, the first new models of the Vulcain were presented, largely based on historical models.