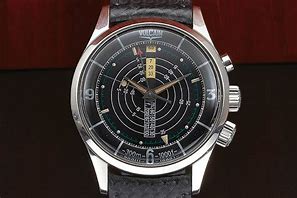 The Vulcain Cricket Nautical released in 1961 was a diver’s alarm watch which added a set of adjustable decompression tables on the dial and had sixteen sound holes on the case back so even underwater the alarm could be heard.

The Nautical Cricket was introduced in 1961 as a true diver's instrument, taking the functionality of the mechanical alarm a step further with the addition of decompression tables built right into the dial. It was designed with the help of diver Hannes Keller who, at the time, held the record for deepest dive (222 meters). The 16 holes in the case back meant the alarm was audible even at these depths. All this to minimize risk to the diver.

The Jeager-LeCoultre Polaris and Deep Sea Alarm watches share more than just an alarm complication with the Vulcain. They all share the same case, which was developed by Ervin PIQUEREZ and patented in 1956. This construction allowed these watches to be audible underwater. JLCs Deep Sea Alarm was the first to hit the scene in 1959, setting itself apart from other popular dive watches of the day with its alarm complication. The Polaris came a few years later in 1965 featuring the same 956 caliber but with the the holes to enhance audibility underwater.

The Vulcain Nautical featured an alarm complication with the same case seen on the Polaris, only a few years earlier. The Nautical differentiated itself with the added function of usable decompression tables within the dial.