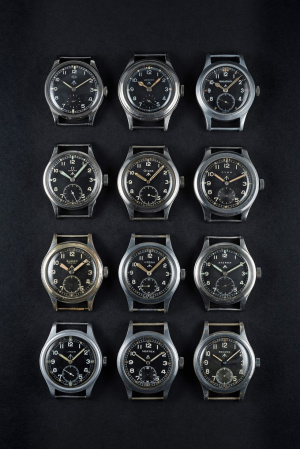 A Brief History of The Dirty Dozen

The Dirty Dozen is the name of a WW2 movie from the 1960s. It is also, in watch collecting circles, the name of group of 12 watches commissioned by the British Ministry of Defense (MoD) during World War II. Twelve companies would fulfill this brief: Buren, Cyma, Eterna, Grana, Jaeger-LeCoultre, Lemania, Longines, IWC, Omega, Record, Timor, and Vertex.

Switzerland exported large quantities of watches and pocket watches during WWII, to both sides. The Ministry of Defence (MoD) decided to put out a tender for custom-built wristwatches. These needed to be accurate, reliable and durable, which in watchmaking terms meant they had to be regulated to chronometer standards, and also be waterproof and shockproof.

The watches also had to have a black dial, Arabic numerals, luminous hour and minute hands, luminous hour markers, a railroad minute track, a shatterproof crystal, and a stainless-steel case. Powering them would be 15-jewel movements, measuring between 11.75 and 13 lignes. They would carry the designation W.W.W standing for Wrist Watch Waterproof, the military arrow or pheon on the dial, and often on movement and caseback, and each would have a unique serial number allowing the Ministry of Defence (MoD) to both track and service them.

Most were delivered after the war in Europe ended in May 1945 but almost all saw service elsewhere and were still being using by the British Army many decades later.