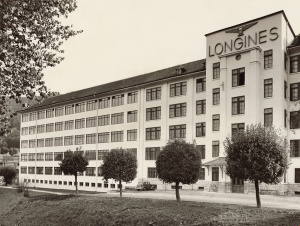 Compagnie des Montres Longines Francillon S.A., or simply Longines, is a Swiss luxury watchmaker based in Saint-Imier, Switzerland.Founded by Auguste Agassiz in 1832, the company has been a subsidiary of the Swatch Group since 1983. Its winged hourglass logo, which was registered in 1889, is the oldest unchanged yet still active registered trademark.

In 1878, Longines developed its first chronograph movement, the 20H. It was a “mono-pusher” chronograph, in which all 3 chronograph functions- start, stop, and reset – were controlled via the crown. With the 20H, Longines could produce stopwatches suitable for precise timing in professional events. This was when Longines began building its reputation in equestrian sports such as horse racing and jumping.

By 1880, Longines was known for the quality and precision of its timepieces. To Francillon’s dismay, the brand became a target for counterfeiters looking to pass off cheaply-made watches as genuine Longines products. “Knock-offs” of Longines were not only directly stealing business and revenue from Francillon, but also potentially damaging his company’s reputation. So Francillon made the wise decision to trademark the Longines name in 1880, and distinctive winged hourglass logo in 1889. By 1886, Longines had already established itself as a primary supplier of timing equipment for most New York sporting officials.

In 1931, Longines collaborated with Charles Lindbergh to introduce an aviation watch called Longines Weems after P. V. H. Weems. It was based on an earlier Longines model which put into practice Philip van Horn Weems’ concepts for a watch to simplify navigation. The Weems watch had appeared in 1927, the same year Lindbergh flew solo across the Atlantic. Its significant feature was a rotatable central dial controlled with a second crown at four o’clock. The dial was marked in 60 equal increments to synchronize running seconds with a transmitted radio time signal.

Lindbergh took what he learned on that transoceanic flight, combined some of Weems’ concepts with new features, and suggested the new watch to Longines. The new watch was 47.5mm in diameter, and both the central seconds dial and the bezel, calibrated in angular degrees, rotated. The watch was used in conjunction with a sextant and a nautical almanac to calculate longitude.

Longines made watches to UK military specification during the war years (1939-1945). See the Dirty Dozen for an example.

Albert Einstein owned two timepieces from Longines, one 1943 silver pocket watch and one 1929 gold wristwatch. His Longines' wristwatch, which was presented to him by Rabbi Edgar Magnin in 1931, was auctioned by Antiquorum for US$596,000 in New York on October 16, 2008, making it the most expensive Longines' timepiece ever sold at auction. His Longines pocket watch is now kept in the Bern Historical Museum in Switzerland. Read more here.

Debuting in 1967, the Ultra-Chron was built to celebrate Longines’ centenary. With Girard-Perregaux’s Gyromatic debuting a year before and Seiko’s Lord Marvel around the same time, the Ultra-Chron was one of the earliest watches to operate at 36,000 bph at a time when the standard was just half that.