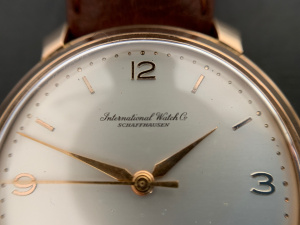 IWC International Watch Co. AG, doing business as IWC Schaffhausen, is a luxury Swiss watch manufacturer located in Schaffhausen, Switzerland. Founded by American watchmaker Florentine Ariosto Jones in 1868, IWC has been a subsidiary of the Swiss Richemont Group since 2000. The special position of IWC is fundamental not only in watch history, but also in geography. It remains the only watch manufacturer in eastern Switzerland.

In 1868, American engineer and watchmaker Florentine Ariosto Jones (1841–1916),[12] who had been a director of E. Howard & Co., in Boston, then America's leading watchmaking company, founded the International Watch Company with the intention of combining Swiss craftsmanship with the modern engineering technology from the U.S. to manufacture watch movements and other watch parts for the American market." At the time, wages in Switzerland were relatively low although there was a ready supply of skilled watchmaking labor, mainly carried out by people in their homes. Jones encountered opposition to his plans in French-speaking Switzerland because he wanted to open a factory. 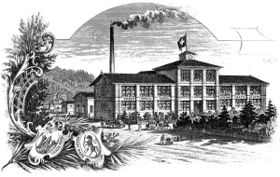 In 1889, the factory had 104 employees, and in the year 1901, it were already 190. At the death of Rauschenbach's son in 1905 the IWC was inherited to Ernst Homberger-Rauschenbach and to 25% to the psychoanalyst Carl Gustav Jung and his wife Emma Marie Rauschenbach-Jung. It now traded under the name J. Rauschenbach's heirs. The former took over the exclusive possession in 1929 and led it until 1955, during this time under the name "Uhrenfabrik von Ernst Homberger Rauschenbach". In 1947, IWC rolled out its famed Caliber 89 movement. This mechanically-wound movement powered IWC models from the 1940s until the early 1990s. It gained a reputation for exceptional accuracy and longevity.

Hans Homberger was the third and last of the Rauschenbach heirs to run the factory as a sole proprietor. He had joined his father's company in 1934 and took control after his death in April 1955. In 1957 he added a new wing to the factory and in the same year set up a modern pension fund for the staff. He bought new machines to meet new demands and continuously brought his production technology up to what were considered the latest standards. He died in 1986 at the age of 77.

The 1970s saw partnership in the Beta21 development and with Porsche Design. 1973 was the best trading year ever for IWC but the sharp rise in gold prices and the flooding of cheap Japanese quartz movements provided a huge shock.

In 1991 IWC director Günter Blümlein founded the LMH Group with its headquarters in Schaffhausen. With a 100% stake in IWC, 60% in Jaeger-LeCoultre (the other 40% was owned by Audemars Piguet), and 90% in the Saxony-based watchmaking company of A. Lange & Söhne. The Group employed some 1,440 persons. In July 2000, LMH was acquired by Richemont, a Zug-based luxury goods behemoth, for CHF 2.8 billion. Despite the takeover by Richemont, IWC was guaranteed that it would continue to be managed by the same executives from the LMH Group.