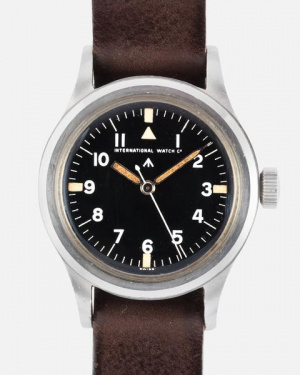 The Mark XI was launched in 1948 when International Watch Company (IWC) and Jaeger-LeCoultre (JLC) produced watches that were based on specifications from the British Ministry of Defense (MoD). Functionality was the primary concern of these timepieces, and the resulting watches would end up as all-time classics. Due to the specification standards that the MoD laid out for the build of the Mark XI, both models from IWC and JLC were quite similar in size and style. However, JLC stopped making their version around 1953, while IWC continued to produce its take until the watch was decommissioned in the early 1980s.

The MoD standards required that the dial, movement, and case all be designated with a broad arrow to indicate it was government property. . The caseback is also engraved, "6B 346 xxx/xx." The "6B 346" stands for the specific model, Mark XI, and "xxx/xx" means it was the xxxth model to be produced in 19xx. The Mark XI served as the debut for the legendary, manually wound caliber 89.