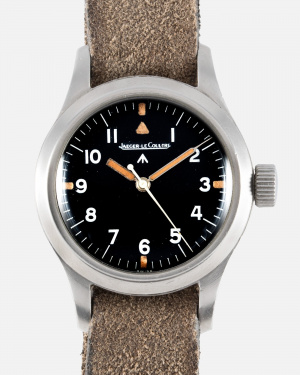 The Mk 11 wristwatch was issued to the British Royal Air Force (RAF) was aviation’s equivalent to the marine chronometer- aptly nicknamed the air chronometer. Considered by many to be the original Pilot’s watch, it was made to the incredibly strict 6B/346 specifications and was one of the costliest commissions for a wristwatch by a military.

Some of the 6B/346 specs included the need to be regulated or adjusted to a chronometer level, the need for a hacking function, for it to be waterproof and to be anti-magnetic. These all stemmed from real needs from pilot’s in the RAF who relied on these watches both for navigation and timing purposes.

The Mk 11 watches can lay claim to be the first watch that was built from the ground up to be antimagnetic. With a thick iron dial and a soft iron dust cap, this created a Faraday cage, protecting the movement from any interference from the other equipment on the plane. It was, without doubt the most advanced watch issued to the military at the time.

Two brands produced Mk 11 watch for the RAF, IWC and Jaeger-LeCoultre. While the IWC Mk11 can be found with a bit of searching, the Jaeger-LeCoultre is extremely rare with only 2950 pieces produced. The JLC Mk 11 is considered one of the holy grails of military watch collecting and indeed one of the rarest. The reason why so few were produced is an ironic one. The RAF preferred the IWC for it’s superior shock protection and discontinued the JLC production after only a couple of years.

Inside the JLC Mk 11 is an in-house, chronometer-grade JLC Caliber 488/SBr. There were not many chronometer grade movements during that time, making this a rare movement. The unique design went on to form one of the highest regarded hand wind chronometers ever produced, the 1958 Chronometré Geophysic.