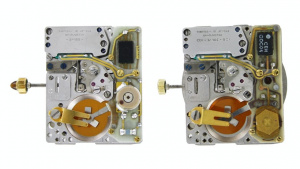 Beta 21 is the quartz watch movement produced by the Centre Electronique Horloger, a consortium of Swiss watchmakers, in 1970. It was created as a response to the new electronic movements threatening the Swiss watch industry.

As quartz clocks and watches became a reality in the 1960's, many leading Swiss watch companies pooled their resources to create the CEH and a quartz watch movement. The first product of this collaboration appeared in 1967 and was called the Beta 1. It was entered in the International Chronometric Competition in Neuchâtel. Although the Beta 1 is often called the first quartz wrist watch movement, it was not intended for series production.

The Beta 1 used a quartz crystal that resonated at 8192 Hz. The resulting signal was routed through a 14 stage frequency reduction chain, producing a final oscillation rate of 0.5 Hz, or one complete oscillation every two seconds. Each half-oscillation triggered a 60-position stepper motor, causing the seconds hand to advance one second in a distinctive dead beat ticking motion which has become synonymous with quartz watches today. This complex electrical process used a great deal of power, resulting in battery life of less than one year.

The second prototype movement produced by the CEH was the Beta 2. It used a simplified 5-stage frequency reduction process which drove a vibration motor. This resulted in a smoother sweep similar to electronic watch movements like the Accutron and Megasonic. The reduced component could also improved battery efficiency to greater than one year.

In 1968, the watchmakers decided to jointly produce a single watch movement based on these designs. The Beta 21 movement appeared for sale in 1970, less than a year after Seiko introduced their own Astron quartz watch for sale.

The Beta 21 is an electronic movement featuring a quartz crystal oscillating at 8192 Hz. This was reduced to 256 Hz and drove a vibration motor like the Beta 2. For this reason, unlike more modern quartz watch movements, the seconds hand sweeps rather than ticking once per second. In contrast, the Seiko quartz movement used a stepper motor like the Beta 1, ticking once per second.

Individual watch companies also produced their own Beta 21-based movements.

The following companies produced Beta 21-based movements but no complete watches are known:

The CEH refined the Beta 21 design as the Beta 22 in the 1970's. This included an improved quartz circuit and was produced in both date and non-date models.