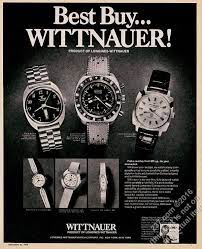 Albert Wittnauer was a Swiss immigrant who arrived in New York City in 1872 at the age of 16. He began working for his brother-in-law, Eugene Robert. A sales outlet had already been established in New York in 1858 by M. P S Broz, who was succeeded by Audemars & Schaffuss, then by F. Eugène Robert & Co. Robert was an importer of fine Swiss watches. With the help of his younger brother, Albert Wittnauer decided there was a need for a watch designed with all of the durability and function the American public demanded but with local production to help keep costs down.

The first Wittnauer's watch line was crafted starting from 1880, but Wittnauer brand was formally established in 1885, when Mr. Robert gave the title to Albert Wittnauer under the name The "A. Wittnauer Company".Wittnauer movements were at the beginning generally made for them by Swiss firms (Revue Thommen and others), while in later years Wittnauer used a number of different sources for their movements. The company began as a small family business, catering to the ever-growing world of both scientific and private exploration, which gained them a reputation for use by those who needed reliability: navigators, explorers, and astronomers.

The A. Wittnauer Co. became further involved with the United States Navy for early tests in the budding fields of aviation and navigation. Of the Wittnauer Company and products, horologist Marvin E. Whitney wrote: "No one company has been more involved in the design and production of so many different types of navigational timepieces and been involved in so many history making expeditions...".

In the following years, Wittnauer Co. steadily grew and moved to New York center. During the 20th century it also bought a production plant in Puerto Rico. When the last Wittnauer brother died in 1916, Martha Wittnauer became the first woman watchmaker CEO.

During World War I Wittnauer produced instruments and watches for the early aviation units. The most famous model was probably the Wittnauer AllProof, produced for the first time in 1918, and one of the first all proof models ever used by daredevill Jimmie Mattern in his 1933 attempt to fly around the world in his Vega 5B, "Old Cromwell", and by Neil Armstrong during the Gemini 8 mission. In 1926, the NBC selected Wittnauer Company to provide the official timing for its radio broadcasting.

On May 20–21, 1932 Amelia Earhart made the first solo flight by a woman across the Atlantic with her Lockheed Vega-5B equipped with Wittnauer instruments. Wittnauer products were widely used in scientific expeditions and exploration, and was - with Longines movements - one of three contenders for the first mission on the moon along with Omega Speedmaster and Rolex Daytona.

During World War 2, Wittnauer started its major production line of compasses, used by soldiers and aviators during combat. These compasses were produced on a large scale and often had the letters US imprinted on the front of their case. To show their brand name, the name Wittnauer was usually placed on the face of the compass, in line with the large "S" (South) on the face. Wittnauer's long history with watch manufacturing and case manufacturing expedited their speed and precision with which their compasses were made. Furthermore, Wittnauer had attained a good relationship with the U.S. military, and was permitted to produce such compasses.

In 1950 the Swiss company Longines bought Wittnauer, and marketed some very similar lines of watches under both brand names, maintaining separate factories.

In 1957, Wittnauer announced a line of 14 cameras with lenses and accessories. These included the CineTiwn, a combination 8mm movie camera and projector, as well as many still cameras with Wittnauer branding. Most of them were manufactured in Germany by Braun, while the Wittnauer Festival model was made by Bolsey. Wittnauer sold cameras until about 1963.

In 1995 Swatch broke the 125-year collaboration between Longines and Wittnauer and took over the Longines distribution. The Wittnauer Company retained its reputation for most of the 20th century. After some budget problems, it was eventually bought by Bulova for $11.6 million in September 2001.