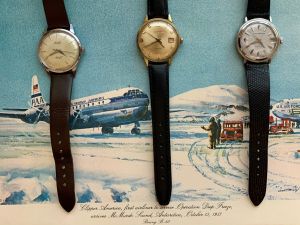 In 1957/58, a group of about forty countries, including the US, Soviet Union, and most of Europe came together to declare the International Geophysical Year (IGY). It was a scientific collaborative effort to explore the Earth’s poles, climb the tallest mountains and advance the exploration of space. This was a time of burgeoning scientific progress, and the watch industry was right there too.

Wristwatches were becoming more capable of highly accurate timekeeping, as well as being exposed to extremes of temperature and water depth. This made the IGY a perfect opportunity for watch manufactures to tie in their products with these scientific endeavors. Earlier in the decade, some of the big Swiss companies had already had their watches tied to famous explorations. Rolex sent their Explorer with Hillary and Norgay on their ascent of Everest in 1953, Vulcain accompanied the assault on K2 in 1954, and Enicar was there for the climbing of Lhotse in 1956. Rolex had great success tying their Explorer to the Everest expedition, and they and other watch manufactures wanted to take advantage by advertising their exploits and attaching themselves to the popularity of the IGY. Two manufactures in particular took advantage of the IGY: Jaeger-LeCoultre (JLC) and Nivada.

In 1958, JLC sent their now famous Geophysic Chronometer with the USS Nautilus nuclear submarine on its journey under the North Pole, while Nivada sent a watch to the Antarctic in 1957. Admiral Byrd and the US Navy went to the Antarctic under the name Operation Deep Freeze, and Nivada created the waterproof and anti-magnetic Antarctic model to go with them. They used this in all their advertising at the time, and were quite successful. Nivada ended up having trouble with Movado regarding their name, and were forced to change it to Nivada Grenchen. They then teamed up with Croton for distribution. That’s why you’ll see watches branded Nivada, Nivada Grenchen, and Croton Nivada Grenchen. Nivada (et al) produced different Antarctic variants—some with date, some without, as well as several different dial designs. 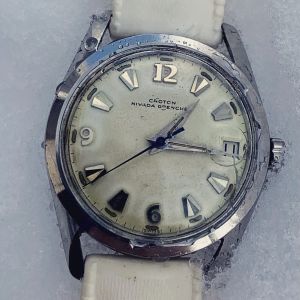 Since the Antarctic got its name and purpose from the Operation Deep Freeze expedition to the South Pole, it was necessarily designed to be waterproof and anti-magnetic. It survived the rigors of the frozen South, and lived to tell the tale—in advertising. The ads touting this connection were numerous, and apparently quite successful as the Antarctic became one of Nivada’s most well-known models, along with the Chronomaster Aviator Sea Diver. One print ad in particular said it all in reference to the Antarctic’s performance on the expedition: “They were subjected to prolonged immersion, extreme altitude and high-magnetism. They were dropped and knocked against ice. They were never wound. Through all these tests, Nivada’s Antarctics kept perfect time.”

The original first issue Antarctic is small by today’s standards, with the stainless steel case measuring 34mm wide by 43mm long with 18mm lugs. The case back screws in, and has a polygon shaped ridge for the back removal tool. This is a great design if you have the exact tool, but can be problematic for those not using the proper wrench, which leaves this style of case back susceptible to marks and gouges. The lugs are very distinctive. At first glance they look a little like bombe lugs, but they are quite different. They are rounded on the side with a flat cut on top that gives them their unique angular look. 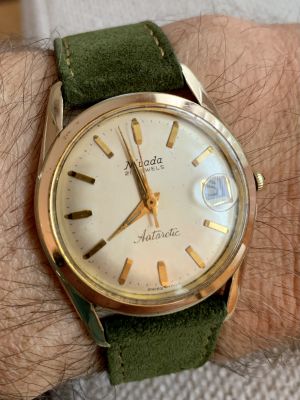 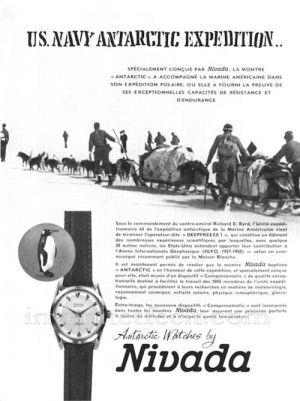 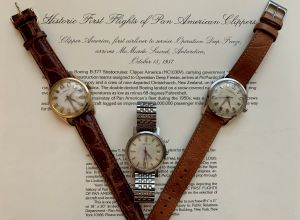 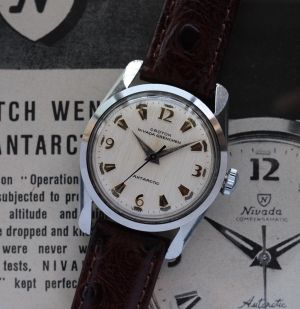