For the history of these models read here. The Nivada Antarctics are a fascinating subject for collectors. With a seemingly never-ending variety since 1956, there is something for everyone. Please note that for the purposes of simplicity, Croton, Nivada and other permutations of CNG are assumed to be all interchangeable on the dial, rotor, crown, box etc. By definition given Croton was the US distributor of Nivada, more Croton examples will be seen in North America, and likewise Nivada Grenchen will predominate in Europe.

There are additional links at the top of each section which will go to further pages for reading and examples on specific model ranges within the huge Antarctic continent of watches. 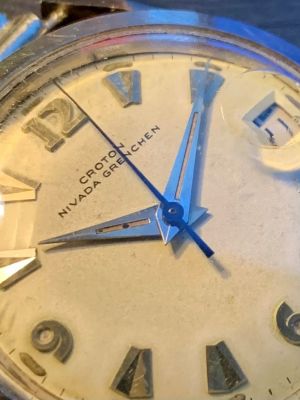 The very first models appear without the Antarctic name - this appears post 1957, after the IGY US Navy Deep Freeze expedition. The original watch model itself appears around 1954/55. There is a great deal of cross-referencing with the Aquamatic models of the same period and the two names appear interchangeable on some models. Between 1957 and 1964 there are a wide variety of model ranges and styles using the Antarctic nomenclature. from rugged explorer watches, to divers and all the way up to dress watches and expensive certified gold chronometers. Nivada and Croton used the marketing kudos of association with the US Navy Deep Freeze expedition to its fullest and it even continues to this day with the new company offering an Antarctic in its range, alongside the famous Chronomaster.

Movements will carry the COW stamp on US imported models. This denotes a Nivada Grenchen SA movement, imported by Croton.

This cataloguing of Antarctic models finds a natural break at the start of 1964. The reason for this is the appearance of the T denoting tritium dials and/or hands is made compulsory in Switzerland after this date. It makes dating a watch slightly easier. The absence of any company history and inability to produce extracts from any archives makes precise dating and chronology of the range an inexact science at best. This is entirely a work in progress and as more collectors provide information we can begin to fill in the gaps and establish a fuller history of these amazing watches. 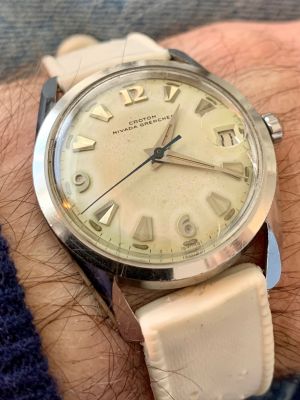 With the same flat lug case and big crown as the first series, these contain an ETA with and without date dial and no Antarctic subtext. It is assumed that these were made before the US Navy 1957 DeepFreeze tour as Nivada certainly used the marketing coup associated with the expedition to its maximum on a huge variety of dials after this date. The same watch also appears with the Antarctic name in an advert. This ETA movement is mostly associated with models circa 1950-1954. The casebacks appear with various permutations of 61 and 63 so it is assumed this is the reference and the case type and movement (eg date or no date), 63L steel etc although this may be some kind of other case coding or year dating. 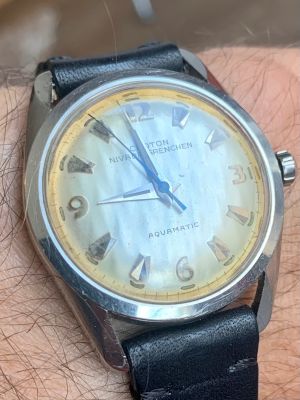 The tundra dial is a rippled effect, unique to Nivada and not seen by this author on any other manufacturers watches. It supposedly replicated snow drifts. These are most commonly seen with Antarctic script but also, in this example, with Aquamatic script and Croton Nivada Grenchen (CNG). They share the same flat lug case and big crown as the first series, ETA and normally no date. It is assumed that these were made before the US Navy 1957 DeepFreeze tour as Nivada certainly used the marketing coup associated with the expedition to its maximum on a huge variety of dials after this date. The same watch also appears with the Antarctic name in an advert. This ETA movement is mostly associated with models circa 1950-1954. The distinctive lug shape, blue second hand and silvered numerals make these popular with collectors.

The Antarctic signed dial first appears, in conjunction with the US Navy Deep Freeze expedition. 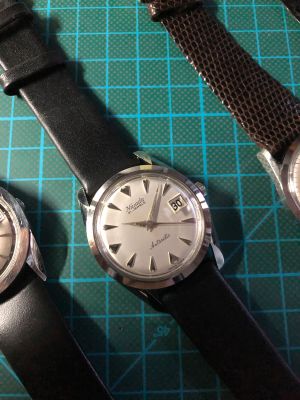 Same bevelled case but change of logo and font indicate a later model.

It may be that the additional D stands for Date on these models. 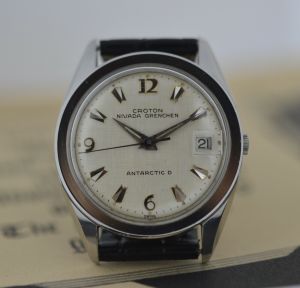 Very unusual and distinctive styling gives this rare model a unique appearance and appeal to collectors. The dial has a hatched linen appearance which is echoed with the thin outer bezel. The polished markers and hands are set off by the polished steel case ring outside the crystal. A 6 point caseback, red dial wheel with trapezoid window and very thin lugs give this example a real dress feel, one to slip on under a tuxedo. It is quite mesmeric to look at and changes colour depending on the light. Estimated manufacture period 1960-64. 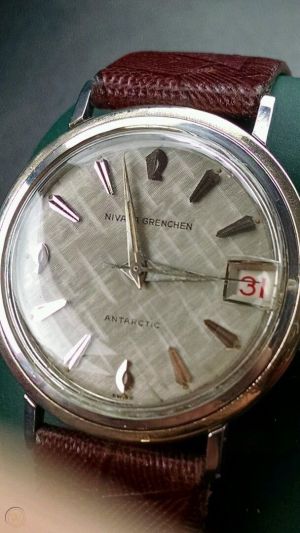 Additional variety was introduced by with Version 3. A move towards a more formal dress style saw thinner lugs and bezels and away from the original explorer concept. The crowns are unsigned and less substantial than the original scallop shape (which had first been seen on the original Aquamatics from the early 1950s).

Most dials have been observed with some marking- they are very prone to wear, damage and water ingress sadly. The unsmooth surface of the linen dial attracts dust and traps moisture. Pristine examples command a premium and will normally be NOS unworn. Another factor is the lacquer or varnish used on dials in this period by Nivada. It is prone to yellowing and discolouring as well as crazing, particularly if there has been any damp ingress, a distinct possibility with the non screwdown crown and a model marketed as waterproof. Very often a white dial (the Antartctic default dial colour) will appear at first glance to be cream or yellow. This can have a charm all its own - all dependent on the individual collectors eye for patina.

At some point around 1960 the font changed from a straight simple uppercase san serif to a stylised wavy written style for the word Antarctic. This is also seen in adverts at the time.

The automatic calibers are normally ETA movements with signed rotor and COW stamped on US models marketed by Croton. 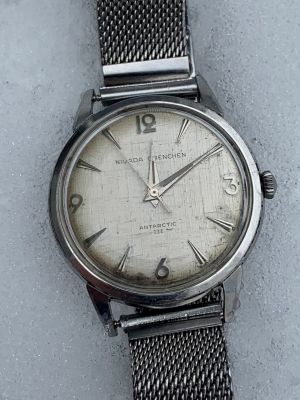 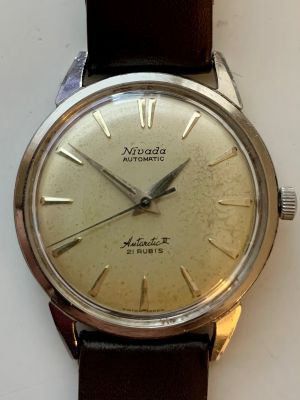 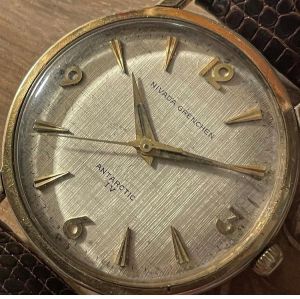 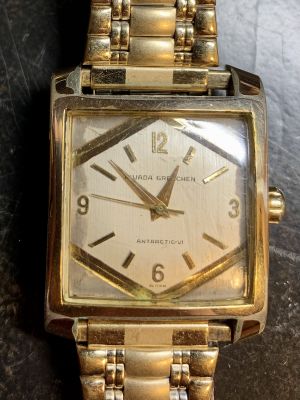 A square gold plated dress watch has been seen with this name.

Although the original Antarctic watches are waterproof and fairly rugged, there was clearly a marketing push to appeal to a wider audience with diving watches being a logical move away from the more formal dress nature of the 1957/57 line. An entire range of diver models are seen with the Antarctic name, including Submarino, Antarctic 200, Super Antarctic from the early 1960s onwards and the name has continued in some form or other with Quartz and lesser models. Read more about the original and collectible models here.