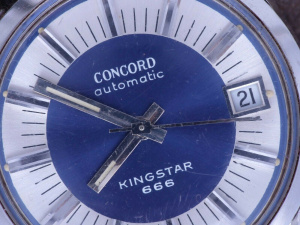 Founded in 1908 in Biel, Switzerland, the brand was created to design watches with the American market in mind. Concord has made several innovations in its history, such as being one of the first “private label” luxury watches to incorporate precious metals and gems in its watches. It was also the first company to make a wristwatch made of coins.

In 1915, Concord started working with companies like Van Cleef & Arpels, Tiffany & Co. and Cartier (jeweler) on providing them with high quality watches made out of precious metals and gems.

In 1970, Concord was purchased by the North American Watch Company. While the company struggled initially, it transitioned into a luxury quartz watch company, and during the quartz crisis it attained a large market share despite other competitors like Rolex. Throughout the 1980s, Concord watches became some of the most recognizable watches on the American luxury watch market, seeing massive sales in luxury stores throughout the Americas. While the majority of Swiss watch makers were in financial trouble due to the quartz crisis Concord took advantage of the situation by producing some of the most expensive quartz watches on the market. By the early 1980s, the North American Watch Company had the largest advertising budget of any Swiss watch company, spending over $14 million annually to attract celebrity endorsements from Jimmy Connors, Bjorn Borg, Joe Montana, Tom Landry and Martha Graham in such expensive publications like the New York Magazine, Texas Monthly, Architectural Digest, Town and Country and Business Week while appearing on TV shows such as Miami Vice, Charlie's Angels, The Love Boat, Dynasty and Hill Street Blues. 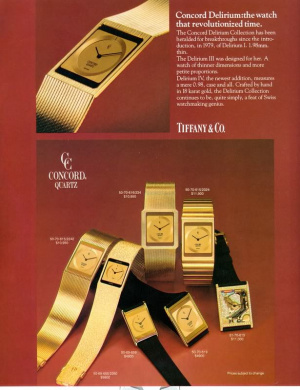 In 1979, it had a major breakthrough with the invention of the Delirium Watch which was the thinnest watch ever made at the time at 1.98 mm thick. Subsequently, a Delirium 2 was released which was even thinner at 1.5 mm. Another notable watch was the Concord Centurion, an ultra-thin sports watch introduced in 1979 that bore a resemblance to the Piaget Polo, the latter billed as the most expensive mass-produced luxury watch. By the 1990s, Concord watches began to fade as the quartz crisis came to a close and the bold Concord look fell out of favor. In addition the parent of Concord, the North American Watch Company sought to focus more on mid- to high-range watches suited to middle class Americans, as opposed to luxury watches for the select few. The company faced a setback when in 1996, the North American Watch Company rebranded as Movado, a mid range watch company that had been purchased in 1984 by the North American Watch Company. This robbed the company of their exclusive luxury watch branding. Further turmoil happened in 2004 when Movado purchased financially troubled luxury Swiss watch maker Ebel, causing Concord to be shunned in favor of their new acquisition.

In 2007, the company made a drastic change in its vision. It closed most of its existing dealerships as sluggish sales and lack of a specific market created a huge grey market that hurt the company’s reputation. The launch of the C1 was highly touted and targeted the ever-popular luxury sport market. The style and pricing were designed to compete with watches such as Panerai, Audemars Piguet and Hublot. With only a couple of hundred dealers worldwide Concord was hoping for a grand relaunch into the Luxury sector. In 2008, watches ranged from between $3,500 to $30,000 in pricing.