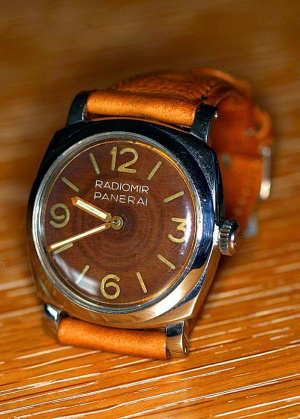 Radiomir, the name for the radium-based luminous mixture is derived from "radio mire", which is Italian for "radium sights". Panerai became an official supplier to the Regia Marina (the Royal Italian Navy), supplying all kinds of technical equipment and precision instruments. All Panerai watches, except for the GPF 2/56 were designed and manufactured by Rolex SA using pocket watch movements made by Swiss manufacturer Cortébert. The main driving forces behind the production of the first professional diving watches were Hans Wilsdorf of Rolex and Giuseppe Panerai.

The GPF 2/56 (Egiziano Grosso) was produced for the Egyptian Navy in 1956. By 1970, the company ceased to provide watches to the Marina Militare, as they were neither cost-effective nor met the naval specifications. In 1993 it then moved to launch its products in the civilian market.

One of the rarest Panerai watches is a Second World War Military Diver watch. This historic watch was acquired by a British soldier named George H. Rowson in WW2. He obtained it via a German frogman during a thwarted attempt by the Germans to destroy the Nijmegen Bridge in the Netherlands, in September 1944.