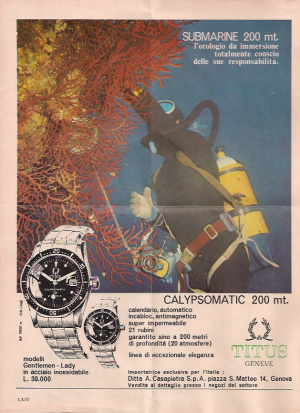 The Titus Calypsomatic was first introduced in the early 1960’s, likely between 1960 to early 62 and successfully ran in production through the early 70's. The 60’s were the golden years for vintage divers as many would call it. With the significant increase in commercial work in the ocean and seas the demand for well made, robust, waterproof watches took off. This created a field of strong competition and demand and as a result some of the best dive watches were produced in the 60’s. Like other brands looking to compete in such a booming industry, Titus introduced the beloved Calypsomatic.

During this era Jacques Cousteau was a very prominent figure, especially for under water diving both for personal and commercial activity. He essentially was gifted what was originally an old 40's British military WW2 ship that was used for minesweeping, which was later converted to a ferry and then refurbished and transformed by Cousteau into an expedition vessel to be a support for base diving, oceanographic research and even filming. During this transition the ship was named "Calypso" after the greek mythological character. Which in greek also mean, she who conceals. So by the time the 60's began, the name "Calypso" was already well known and documented and I am sure Titus was familiar with Cousteau and his ship and this could have inspired the first part of the name "Calypso".

Adding the "matic" at the end was likely because the watch housed an automatic ETA movement. The word auto-matic broken down simply means "willing to self-perform". * During this time period the automatic was still a big deal and was a significant selling point in advertisements.

Titus also made co-branded Calypsomatic models for Dacor but they are not gilt and have mercedes hands. 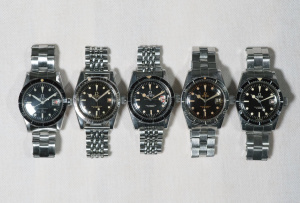 The first execution for the Calypsomatic was the reference 5913. The gilt print stopped being used around 1967 along with the famous lollipop hour hand. The reference 7985 was the last with this complete configuration and you see the changes immediately with the following 7986 reference. Transitional (very early) 7986 references may have a gilt dial and if you are lucky still the lollipop hour hand but its unlikely in most cases.

The case is beautifully designed and was shared amongst a few other models such as the Universal Geneve Polerouter Sub and the Technos Sky Diver just to name a few. As a utilitarian watch it has the practical drilled lug-holes and pointed downward bending lugs that wrap nicely over the wrist.

The Calypsomatic uses an ETA2452 for the first generation and the ETA2472 movement for the rest. The 2472 is a mechanical movement with automatic winding, date display with semi-quickset feature, and power reserve of 42 hours. 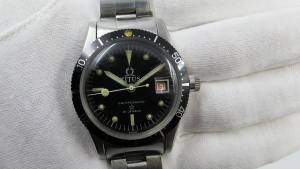 The first execution for the Calypsomatic is the 5913, some including 5913-a on the case. Although there are a couple variations of the 5913 as a reference itself the first generation has a very specific dial, hands and crown that differentiates itself from the rest.

The dial itself is a highly desired gloss dial. The glossy finish is susceptible to some cracking, spider lines and scratches so expect to see them similar to most glossy dials of its period. While the other early Calypsomatic used gilt (gold text) for the print of the logo and writing of the words, the first generation used white print over the glossy finish. This was also used for the minute track, the surrounds around the lume plots and the date window box. A spectacular feature when you examine the dial is that the lume plots are connected to the hash marker, a feature also known as a lollipop. Something to notice is the lume plots should be neat but relatively tall and you should be able to see the white paint around the plots boarders for the original finish. A sloppy finish could indicate a relumed job. The dial also has a distinct star located between the words “Calypsomatic” and “21 Jewels”. This was exclusively used on the first generation dial. Also, below the 6 o’clock marker should state the word “swiss”. There is no “T” denoting tritium because the first generation used radium for the luminous material.

The hands are the most unique of all Calypsomatics and only used on this model. It features 3 section pencil shaped, lume filled hands for both the hour and minute. The luminous material should be radium. The hands are painted white so its common to see a little chipping or discoloration around the edges due to the radium. The second hand has a wonderful big bubble with luminous material that is applied on top of the circle. This is not lume filled but applied over a base. If the luminous material is missing from the seconds hand you won’t have a hole but just a white base plate underneath. On occasion you might notice the paint on the second hand to be slightly brighter likely due to less radium material on them.

While the case itself is essentially identical to other references it is the crown that is most unique. There are 2 different crowns used on the first generation Calypsomatic. The one most often used and seen in actual advertisments is the “superocean” style crown which premiered on the early Breitling diver reference 1004 in the late 50’s. This crown which aesthetically is great looking but a terrible design. If you find an example with the crown design not replaced it is certainly worth more as this is one of its major distinctions. It's no wonder the Calypsomatic immediately abandoned the design with the later push in big crown used in its predecessor. The crown has a two piece design with the base that is actually a part of the case itself and then a flat ~5.8mm crown that screws into the base. These proved not be very durable so don’t be surprised if you find a first generation model with a replacement crown. The stem used is a two piece where one end slips into the other.

The second crown was likely used after the superocean crown as a quick fix to the poor original design which is the Parmentier crown. The parmentier crown is a short, very small crown with a thin lip underneath a removable screw down cap. These caps once unscrewed was completely separate so they were often lost so consider it a bonus if yours still has it.

The first generation has a thin one piece metal bezel that feels like a hard plastic material in the hand. The bezel is painted black and has silver numbers and a lume filled circular pip. The bezel is all one piece and snaps into place with a commonly used thin metal retainer ring underneath that keeps it attached to the case. It is a non-click friction rotating bezel. The first generation should have a count-down 60 minute bezel with a circular lume filled pip. 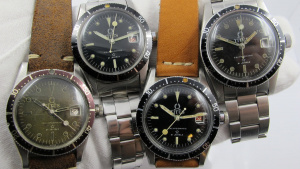 The acrylic crystal should have a cyclops magnifier on the plexi located above the date where the 3 o’clock marker would be. The bubble will not be as big and as exaggerated as the 7085 crystal. The date wheel on the earliest version is a red text only date wheel (not red/blue) with open 6's and 9's.

The case-back is a one piece stepped that screws down and should have 5913 engraved on it. There are two different case-backs for the first generation both being stepped and screw down. The first being a rarer one with an extremely large logo covering nearly the entire back with the word “Titus” written big in the middle and underneath the words "swiss incabloc waterproof non-magnetic". You will see "stainless steel" and "5913" engraved below the 3 circles in the logo. The second is the more common small logo with “Solvil et Titus Geneve” and 5913 engraved below it. The same words written but going around the outer edge. Inside the case-back you will see a Swiss patent number which is +Brevet 238872. There is an edge for a rubber O ring to go around.

For the bracelet you would be looking at an oyster style rivet with a thin Titus name & logo stamped clasp. These are generally rare to find with the watch.