Société des Garde-Temps SA was a federation of Swiss watch manufacturers active in the 1960s and 1970s. Solvil and Titus was a member. 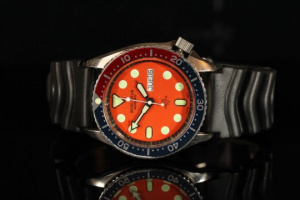 Through its manufacture, Ditisheim was instrumental in developing the new generation of chronometers, improving them grandly through his studies on the impact of atmospheric pressure and magnetic fields. He invented the affix balance. Thanks to his inventions, he was able to make the most precise chronometers ever made. By 1903, his watches were awarded by the Kew and Neuchâtel Observatories contests. In 1912, he won the world's chronometric record of the Royal Kew Observatory. He also worked closely with Physics Nobel prize winner Charles-Edouard Guillaume and has been considered the father of the modern chronometers.

In 1930, Paul Ditisheim handed over the Solvil et Titus and Paul Ditisheim brands to wealthy Swiss entrepreneur and captain of industry Paul Bernard Vogel. Vogel, heir to a prestigious family of industrialist and married to the heiress of the prominent Eberhard family, was also a member of the Swiss watch industry's elite. Vogel moved the company's headquarters to Geneva where he started expanding it. Vogel was one of the most prominent members of Geneva's high society, he was the chairman of the Salon Montres et Bijoux (the Watch and Jewelry's Fair), the most prestigious association of Swiss watch manufacturers and jewelers of the time and used the various social events he organized to advertise his company's collections.

By the 1950s Vogel, feeling the shift in consumer's habits, decided to divide its brands into two. On the one hand, the company kept producing the luxury watches it was famous for. On the other hand, it started producing lower-cost watches that fitted properly the emerging mass consumption markets. Thanks to this new orientation, Solvil et Titus was instrumental in the development of mechanical and electronic watches.

In 1968, Vogel took the lead of the newly founded Societe des Gardes-Temps SA, a conglomerate of low cost watch manufacturers which was the world's third largest watchmaking company of the time and had a true international dimension (it acquired the American Waltham Watch Company and signed a licensing agreement in 1973 with Elgin Watch – then Swiss watchmaking's biggest foreign investment.

In the late 1970s, Paul Vogel who inherited the company from his father came back to Europe and decided to sell the Solvil et Titus brand. The European activities became part of Ebel while the Asian activities were sold to Hong Kong entrepreneur Joseph Wong and are now part of Stelux Holdings.