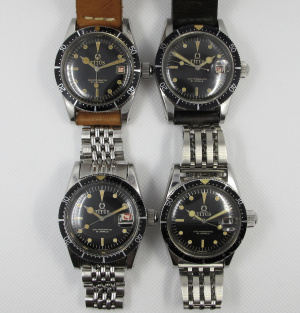 The early to mid 60’s saw the Calypsomatic begin to establish itself in the market both in demand and design.

Tt is the exact same dial as 2nd Generation for the early production run. This is likely because like all brands whatever parts were left over would simply be used first before using the next batch of parts creating what collector's call "transitional" models. This was just smart and economical for every brand and Titus was no different. So you will commonly see a 7085 marked case or case-back with a large logo, T Swiss Made T, gilt dial as you seen in the later 5913 reference.

Perhaps in the middle or late production the 7085 reference introduced a new beautiful dial - the "small logo" dial. This dial retained its glossy lacquer with gilt print. However, the gilt printing process was done in reverse. Meaning, the gilt color is actually underneath as the base plate and the glossy lacquer is applied over it instead of writing the gilt text on top of the dial after the lacquer is applied. This is the same process that Rolex implemented on their gilt print where the gold color is below the lacquer. These new dials which we will see is used in the next reference actually began its start in the 7085 and are noticeably different if you know what to look for. First the logo and "Titus" on the dial is clearly smaller. The “Calypsomatic, 21 Jewels” is positioned higher up and more towards the center of the dial then before. The bottom of the dial will always say “T Swiss Made T”, by this time radium was completely fazed out and tritium was the new industry standard. 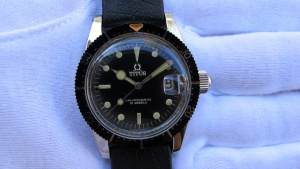 The hands remained the same and should be a lollipop hour hand and not a Mercedes style hand. If a 7085 has a Mercedes hand it is a newer replacement handset.

The next visible difference is the bezel. While the material, shape and size are the same as the second generation 5913, one should expect the 7085 to have a triangle pip and not the circular one that we have seen in the previous references. Also, both the count up and count down bezels were still being used. Expect the lume in the triangle to be missing most of the time, a relume fill in is common and recommended when missing.

While the 5913 had an oversized crown, here is where we see the bullet style massive ~7.4mm crown that vintage diver fans go crazy for. This is the largest crown ever fitted onto a Calypsomatic. This one has a large bump on the end that gives it the Calypsomatic signature look that many are accustomed to seeing. It is a screw down and unsigned with the same 2 piece male and female stem as before.

The date wheel with the early big logo dial should be a blue and red over white. If the dial is the new small logo dial then it can have either the blue/red or the all black date wheel. More commonly the black date wheel should be seen. We will see an all black over white date wheel in the following Calypsomatic so it is likely that it was introduced in the later production of the 7085 along with the new dial. The domed crystal has the bubble cyclops but this time it is very large making the date numbers appear huge.

The case is the same as before with a different model engraving. You should see "7085" engraved on the case between the lugs at the 12 o’clock position or on the outside of the case-back. Generally its one or the other, in some cases you may see both. In a rare instance you may see the model engraving at the 6 o'clock position.

For the bracelet expect to mostly see a beads of rice style bracelet with a logo and Titus signed on the clasp. Later examples can have an oyster style. End-links are always unstamped.

The movement is a ETA 2472, 21 jewels. The rotor should be signed with “Solvil et Titus” along with the jewel rating.