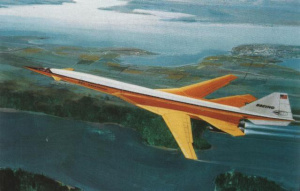 SST stood for SuperSonic Transport and this model was released during an age where the world believed that supersonic passenger jets were the future. During the early 1960s, President John F. Kennedy instructed the Federal Aviation Authority to prepare a report on "national aviation goals for the periods between now and 1970". Whilst Kennedy did not live to see it, one of those goals was to compete with supersonic aviation projects of other countries, namely the British and French Concorde and the Ruissian Tupolev TU-144.

Boeing won the lucrative contract to develop the first American supersonic commercial jet and began tests in the mid 1960s. Boeing planned for their plane, named the 2707 SST, to fly at Mach 2.7 (0.7 faster than Concorde) for a distance of up to 4200 miles with a capacity for 250 to 300 passengers. The 2707 was intended to have a 'swing wing' system which would allow the wings to change position from straight out during take-off and landing to a delta wing position as the speed increased. 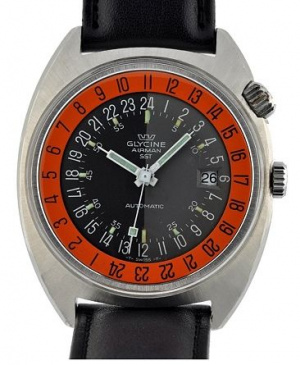 The Airman SST, like the planned Boeing 2707, was a major departure from previous designs. The tonneau-shaped case was a mixture of brushed and polished finishing and the use of color on the dial was striking. The crown controlling the rotating bezel was moved to 2 o'clock on the dial and the bezel was placed underneath the crystal In fact the orange color of the outer bezel is what gave the SST its nickname among collectors, 'the Pumpkin'. The crowns are either the normal cross-hatch style as seen on the Airman, or smooth with a screw type slot at the 2 o'clock position.

Dials are two tone, split between AM and PM. Hands and dial are tritium lumed and will change colour over time and can degrade with loss of lume.

On the case back was an engraving of what appears to be the Boeing 2707, though some believe it to be either Concorde or the Soviet Tupolev as the designs were similar. It is a striking and somewhat 'cool' feature of the watch and adds to its 21st Century appeal. 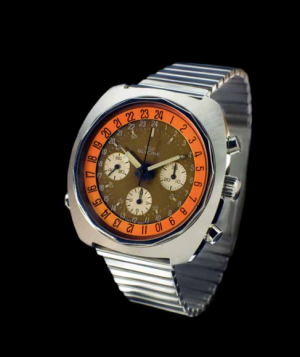 In 1968, Glycine released the first Airman chronograph, the SST Chronograph. It remains one of the rarest Airmans ever made with only 100 leaving the factory. It used the venerable Valjoux 72 movement and had a power reserve of 46 hours. But like the Boeing 2707, the SST chrono was not destined to soar. As the cost of the project inflated, Boeing eventually were forced to cancel testing with the two prototype SSTs never taking off. As for the SST chronograph, Glycine launched it at just the wrong time as one year later, several self-winding chronographs were launched making the manual wind SST obsolete.

The SST models are an unusual and rare addition to the Glycine collectors portfolio. Full sets with original wooden box and instructions do come to the market. The rotating bezel, flash of orange and wearable size make this one to look for. The Chronograph is a real 'hens teeh' Holy Grail and almost never seen in the wild. 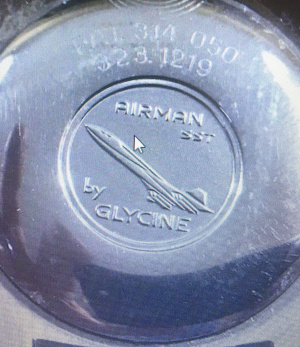