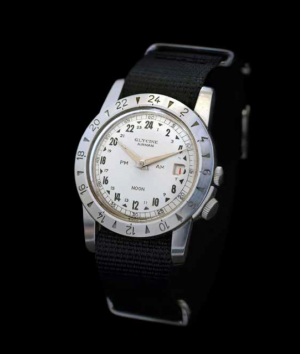 In 1953, Samuel W. Glur, a sales director for Montres Altus S.A., was on-board a Thai Airways flight from Bangkok to Calcutta. Samuel struck up a conversation with the captain about his wristwatch needs.

The Cartier that Santos DuMont wore on his first flight was practically identical to other dress watches of the era and the watches that pilot's had worn during World War II might have been larger and more legible, but they were hardly specialized tools. The Breitling Navitimer, released in 1952, was a technical marvel which allowed pilots to make quick calculations thanks to its rotating slide rule bezel, but only one timezone could be read at one time. In an age of propeller driven planes, that was fine but the jet age was soaring into view. Planes were flying faster and further than ever before and pilots needed a tool to help them.

What the Captain said he wanted was an automatic, waterproof watch with calendar function and a 24 hour dial with centralized hour, minute and second hands with a rotating 24 hour bezel. After touching down in India, Samuel Glur wrote to his friend Charles Hertig about the potential market for a dedicated pilots watch. These specifications would be turned into a real watch just a few months later, the Glycine Airman.

Evolution of the Airman 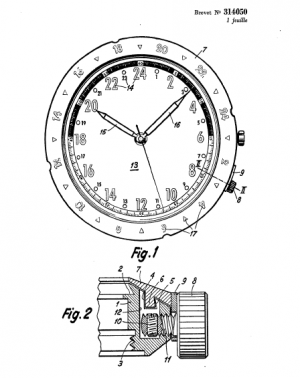 Looking at the design evolution of the Airman, it is clear to see that the very first release of the watch was a test as a lot of elements would change a few months later. The AM/PM written on the dial to allow easier reading of the time of day would go, as would Noon written at the bottom of the dial. The dauphine hands would be changed in favor of pencil/syringe hands and the hour markers would become uniform in size rather than emphasize the even hours. The rotating bezel would stay mostly the same, as would its locking mechanism.

The idea of a rotating bezel to act as reference device for checking the time was beginning to catch on in the early 1950s. Also releasing in 1953, the Rolex Turn-o-graph was the first regular production Rolex to use a rotating bezel to mark time, and it would serve as inspiration for the Rolex Submariner and the Rolex GMT-Master. What makes the Airman bezel unique was its locking mechanism. The bezel was not ratcheted so unique time zones that were in-between hourly intervals could be measured. Glycine added a thumbscrew at 4 o'clock to lock the bezel in place once set. 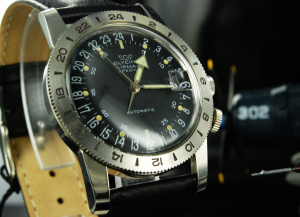 Inside the first Aiman was the Felsa Caliber 690 or 692 which had 23 jewels and beat at 21,600bph. The number of jewels would soon cause issues when importing the watch into America. During the 1950s, an America First mentality amongst lawmakers resulted in tariffs being placed upon foreign goods being imported into the United States. If a watch had above a certain number of jewels, an tariff would be added. The hope was that by making these goods more expensive, it would encourage American businesses and government agencies to buy American. But the quality of Swiss watches was too great to pass up, even if it meant creative side-stepping of the law in both countries. The Airman Special, released later in 1953, was an altered version of the Airman which only had 17 jewels, allowing it to pass under the tariff bracket. These watches were marked with a cursive Special underneath the Airman name, so if you see this text then you know that it was made for the American market. In time, the pencil/syringe hour hand was changed to a large arrow and a tail was added to the hour hand to allow the reading of the time on the other side of the dial. 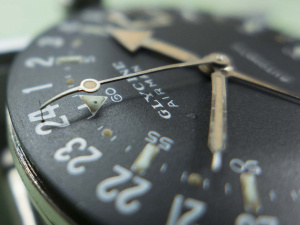 Glycine added a new feature , a unique hacking seconds mechanism. Hacking seconds or stop seconds is a common feature in military/tool watches as it allows precision setting to a unified time. By pulling the crown out, the seconds hand of the watch will stop and will only start moving again when the crown is pushed back in. What Glycine did different to every single hacking mechanism of 1953 and even today. Rather than stop immediately when the crown is pulled out, the seconds hand would keep rotating until it reached the top of the dial. There a small wire would be sticking out from a minuscule hole between the 2 and 4 of 24 which could catch the hand and stop it from moving. When the hour and minute hands have been set and the crown screwed back in, the wire would drop back into the hole and the seconds hand would continue moving.

Not all watch restorers are familiar with the mechanism or repair of it. It is often missing in older models.

The Felsa movement was discontinued around 1961 and replaced with an A. Schild movement. Various changes were seen in the dial itself. The caseback moved from a screw-in to snapon around this time and the date wheel changed to black from red.

In the twenty-ﬁve years that Airman Model 1 was in production, there at least eighteen different models.