Glycine is a wristwatch manufacturer, founded in 1914, and based in Bienne, Switzerland. The Airman line, debuted in 1953, a collection of watches featuring 24-hour analog dials and rotating bezels The Airman was worn by United States Air Force pilots during the Vietnam War. 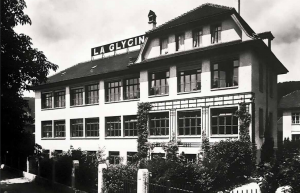 Founded as Fabrique d'Horlogerie La Glycine in 1914 by Swiss watchmaker Eugène Meylan, Glycine initially specialized in designing and manufacturing small movements for ladies watches, and during the 1930s, Glycine launched its own Automatic self-winding watches, and subsequently, chronometer watches.

In 1943, Charles Hertig Sr. bought Glycine and it would be under his tenure that Glycine would create their defining watch, the Airman. With the advent of Transatlantic flight|intercontinental air travel, the Glycine Airman was released in 1953, meeting the needs of pilots. In keeping with its aviation link, Glycine also introduced the Airman SST in 1967, inspired by supersonic transport.