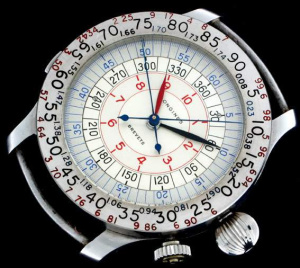 As the prospect of war loomed, the RAF and USAF made plans. The expansion schemes from 1934 to 1939 provided the opportunity for forward planning and item which needed to be sourced was a hacking watch for pilots to assist with accurate navigation. This needed to be simple to use for dead reckoning navigation. The original Weems shown right was actually too complicated - a more simple easy-to-read version was required.

British and American air forces held joint meetings regarding the design of the American A-11 watch, which in Britain was sourced for the RAF and labelled the 6B/159. The watch was to have a hacking facility. The Weems A-11 was initially manufactured in accordance with US military specification 27834, published in August 1937.

The British military deemed the A-11 Weems model too small at 27mm diameter, and Longines produced a 34mm version from 1937 onwards.

About 7000 Weems 6B/159 watches were produced to this specification, and they were individually numbered xxxx/40 on the case back.

The Longines Weems is thought to be the most common, and the Movado the least common.