In the early stages of World War II (WWII), Mr. Wakmann started his watch business in Portugal At the same time, warfare was spreading across Europe.

During WWII in North America, many American watch companies were put at a disadvantage. Their production was switched to war products, while the Swiss watch manufacturers produced watches for war efforts and civilians. As a result, the U.S.government decided to support the American watch industry. The Swiss Watch Import Act was subsequently formed, and the U.S. Department of Commerce started to impose custom duties on high-end imported Swiss watches. Mr. Wakmann quickly recognized that this was an excellent opportunity to start his professional watch business in America.

Wakmann was appointed as the official producer and deliverer for the U.S. Military during WWII. This appointment was a further testament to the excellent quality of Wakmann watches. Airforce technologies evolved rapidly during the ongoing warfare in the 1940s. New innovations include jet aircrafts, radar and ballistic missiles. During the same period of time, Wakmann also started to develop professional timing instruments for the aviation industry, such as cockpit clocks for both military and commercial aircrafts, and professional wristwatches for pilots. 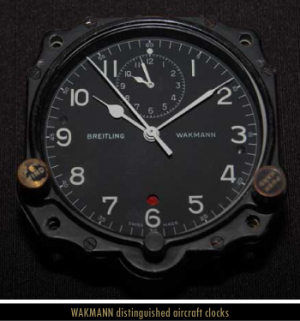 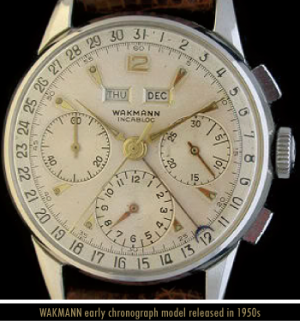 During the early business years, Wakmann focused on the design and production of high-end timepieces and gained its status as the leading manufacturer of precise professional timepieces. In the 1950s, Wakmann extended its business horizon from North America to establishing itself as a reliable global brand. The Wakmann Production Department ensured ample continuous supply of quality products and accessories. At the same time, Wakmann also provided a comprehensive range of professional after-sales services for its customers. In order to clearly define the product development roadmap, Wakmann categorized its timepieces into four collections: - Timers and stopwatches. - Chronographs and multi-purpose technical watches. - Complete line of aviation timepieces, made in accordance with the latest military and commercial specifications. - Full assortment of ladies’ and gentlemen’s dress and utility wrist watches. 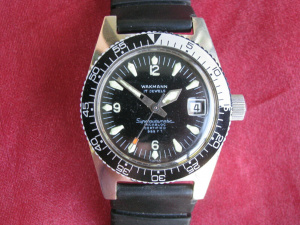 1970s – Exclusive Central Register Timers. Many elite athletes emerged with brilliant performances in the 1970s. Billie Jean King defeated her male component Bobby Riggs in the “Battle of the Sexes” which was nationally televised. Mark Spitz set seven World Records to win a record seven gold medals in the 1972 games – an unprecedented feat for the Olympics swimming events. Gymnasts Olga Korbut and Nadia Comaneci both delivered legendary performances in the 1970s Olympics. The 1970s also marked a boom in the popularity of distance running and jogging.

The Wakmann Regate and The Bridges of Madison County (Clint Eastwood)