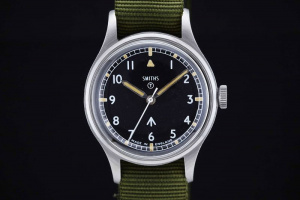 The W10 is the most humble and common of the collectible British military watches, a plain field watch issued to British Army serviceman since WW2. There is some general confusion around the terms used for these watches, as “G10” was a reference to the form that serviceman were required to fill-out to receive the W10 watch. Even though the form was called “G10”, this term is colloquially used to reference almost any general service MoD issued military watch, and CWC actually has a model “G10” that references their quartz models post-1980. To make things even more confusing, the term “W10” is used specifically by collectors to reference the “tonneau” shaped case versions of the watch that were issued during the 1970’s.

The first W10 watch was issued by Smith’s in 1967, a strikingly simple and balanced field watch featuring arabic white numerals on a simple black dial lined with a track around the edge of the dial. The W10/G10 has followed the same pattern ever since. The Smiths W10 has the distinction of being the last mechanical watch actually made in the United Kingdom for issuance to the military. 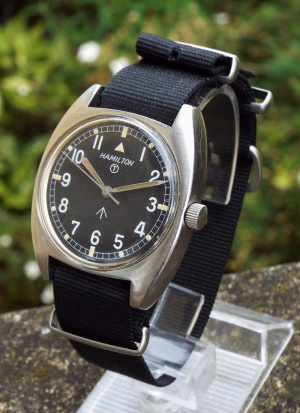 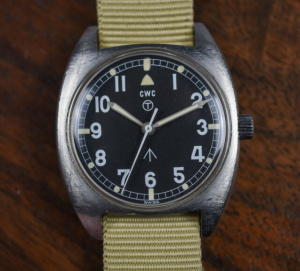 By the late 1970s Hamilton itself was on the ropes due to the Quartz crisis engulfing the industry, and pulled out of the military watch supply business. However, an enterprising British employee of Hamilton, Mr Ray Mellor, their contracts director, recognised that there was still a significant demand for these watches from the Ministry of Defence. Accordingly, in the 1970s he established the Cabot Watch Company (CWC) to take over where Hamilton left off.

Using the same components and Swiss suppliers as Hamilton, CWC began supplying an essentially identical watch to the Hamilton W10, except with CWC instead of Hamilton on the dial. CWC would go on to become one the most famous later producers of British military watches.