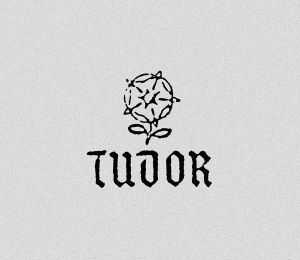 n February 1926, the house of “Veuve de Philippe Hüther”, a watch dealer and maker, registered the trademark “The TUDOR” for Hans Wilsdorf. Established in Geneva, he acquired the exclusive usage rights from the dealer.

The first watches bear a simple TUDOR signature on the dial, with the horizontal bar of the T lengthened above the other letters. On some rare pieces, the name Rolex also appears. Rolex would effectively guarantee the technical and aesthetic quality of TUDOR watches until the brand attained autonomy in this field. The TUDOR-signed watches included models for both men and women; they were mainly rectangular, barrel-shaped or with bevelled sides. In 1932, TUDOR watches for the Australian market were delivered exclusively to the Willis company, which was entrusted with distributing them to the best jewellery shops in the country. TUDOR “CATANACH’S” The rectangular watch with bevelled sides in chromium-plated metal presented here illustrates the type of product that TUDOR created in this initial period. It had a two-tone, two-sector cream dial with luminescent Arabic numerals, baton hands in blued steel with luminescent material, a minute track and a small seconds hand at 6 o’clock. Its Calibre was barrel‑shaped, recognisable by its three red rubies visible on the top plate. Established in Melbourne since 1874, Catanach’s Jewellers is one of the oldest jeweller families in Australia.

On 15 October 1936, the house of “Veuve de Philippe Hüther” transferred the brand “The TUDOR” to Hans Wilsdorf. In this same period, the rose of the TUDOR dynasty appeared on the dials. Inscribed within a shield, this logo symbolised the invincible union of strength – the watch’s robustness – with grace – the beauty of its lines.

Just after the Second World War, Hans Wilsdorf knew that the time had come to expand and give the brand a proper identity of its own. Thus, on 6 March 1946, he created the “Montres TUDOR S.A.” company, specialising in models for both men and women. Rolex would guarantee the technical, aesthetic and functional characteristics, along with the distribution and after-sales service.

From 1947 onwards, a year after the official launch of TUDOR, the shield gradually disappeared from the logo. Henceforth it would consist of only the company name and the rose; finely drawn or as an applique in relief; thus emphasising the brand's elegance and style.

In 1948, the first advertisements dedicated to TUDOR were launched. The brand was clearly associated with Rolex, both in the text and in the logo. The models shown were for both men and women. The copy emphasised the aesthetics of the watches, their chronometric precision and their waterproofness.

In 1952, the TUDOR Oyster Prince was launched, accompanied by an advertising campaign that was particularly original and striking for the era. This campaign was not limited, as was usual practice, to showing and describing the product. Instead it emphasised the qualities of strength, reliability and precision in a very detailed text, as well as through illustrations showing men at work in extreme conditions wearing a TUDOR on their wrist. It was a less conventional choice than depicting sporting activities. These strong images, associated with the product’s credibility, contributed to giving TUDOR watches a style and personality reflecting the ideas of modernity and reliability – greatly surpassing the individual contexts in which they were shown. 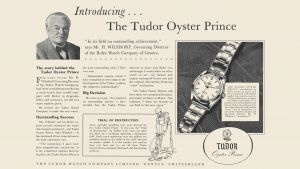 In 1953, Rolex launched a campaign based on robustness tests on the TUDOR Oyster Prince and its endurance in particularly difficult conditions: -watch worn by a coal miner during 252 hours of excavation by hand -watch subjected to the vibrations of a pneumatic drill for 30 hours -watch worn by a stonecutter for three months -watch worn for a month while riveting metal girders in building construction -watch worn by a motorbike racer over a distance of 1,000 miles. Emphasis was placed on the great strength of the watches, their precision, their efficient winding and their waterproofness even in extreme conditions.