The Seiko and Apocalypse Now

The Seiko and Apocalypse Now 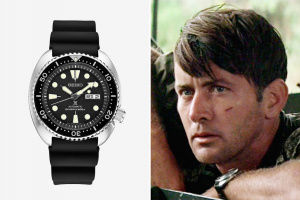 Widely considered the definitive Seiko dive watch, the 6105 actually has a lot of real-world history that led to it being included as Capt. Willard’s timepiece of choice. In fact, during the Vietnam War, it was an extremely popular watch amongst U.S. servicemen for both its style and durability. While the watch was certainly the obvious choice for the character, director Francis Ford Coppola’s inclusion of the timepiece was clever, showing how important the little details can be. It’s hard to find an original of this particular watch, but recently built a recreation of it with a modern movement called the Seiko SRP777K1.

Colonel Kurtz (Marlon Brando) can be seen wearing a bezel-less Rolex GMT-Master in the same film.