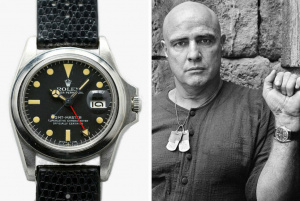 Marlon Brando was apparently told to remove his personal Rolex GMT Master ref. 1675 on set, as the feeling was that it would look too new and out of character for Colonel Kurtz, a Special Forces officer gone rogue. Brando insisted on wearing the watch, famously popping off its bezel and wearing it “naked” throughout filming.

Brando gifted the watch to his daughter in 1995, and it was auctioned in December 2019. The watch, sold as it was worn in the movie (without the bezel). The 39 mm Rolex GMT-Master Superlative Chronometer with date (with cyclops magnifying window) is created in steel with luminous markers.

Circa 1972, the Rolex Ref. 1675 is in well-preserved state. It was sold with two signed provenance letters from Petra Brando Fischer and Caroline Barrett. It sold for $1.61 million, translating to $1.952 million with fees.