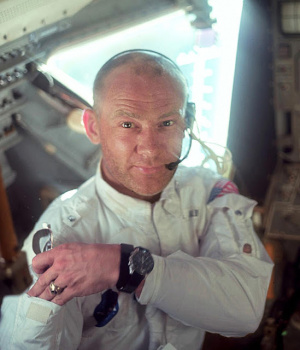 On the 20th of July, 1969 the first manned lunar landing took place. It was certainly one of the most dramatic scientific achievement in human history - perhaps the pinnacle. Neil Armstrong was the first to step onto the moon’s surface. Since the electronic timing system on the Lunar Module was not functioning correctly, Armstrong had left his watch aboard as a reliable backup. Nineteen minutes later he was joined by Buzz Aldrin, who was wearing his Omega Speedmaster Professional. It was the first watch worn on the moon. It was an Omega Speedmaster Professional with a Calibre 321 movement. A few months after this mission, Buzz's watch was stolen en route to the Smithsonian Museum and never recovered.

Should it ever be discovered, and there is enough information from NASA to confirm originality should it appear, it would probably become the most valuable watch in this world or the next. Keep your eyes peeled for the ultimate Grail Watch!