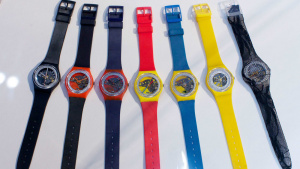 In the late 1970s the Swiss watch industry was under an existential threat - quartz digital cheap disposable wristwatches from the Far East.

ETA SA, a company that made watches and movements had recently invested in an injection-molding machine ETA spent 15 months crafting a plastic prototype watch that was one piece and welded together. The significance of a sealed unit was that it economized the entire process, turning watches from handcrafted units to models that could be produced by automation. The watches required just 51 parts instead of the 91 pieces typical of most models at the time. The first Swatch was launced in Zurich in March of 1983.

The Swatch name came from a contraction of two words: secondary watch. The idea was that a watch could be the same as any other fashion accessory. Swatch saw their sales rise from $3 million in 1984 to $105 million in 1985. Thanks to an effective advertising campaign and more eclectic color choices, public perception of Swatches put them firmly in the fashion category.