Squale is a small Swiss watch brand founded in 1946 by von Büren S.A./Montres, specializing in professional diving watches. Squale is owned by the Maggi Family, who had previously been distributors of von Büren/Squale watches in Italy.

Squale was founded by Charles von Büren in Neuchâtel, Switzerland, in 1946 as a manufacturer of watchcases and other components for other watch brands. Originally, the "Squale" mark appeared on watches as a symbol of the case's origins and pride in its quality.

In 1950, von Büren S.A./Montres began to produce their own range of professional diving watches under the Squale brand name. These watches were not marketed for jewelry shops but rather specialty dive stores.

In 1974, Squale entered the watch market as an independent entity. Following the watch industry's "quartz crisis", Squale halted their production of mechanical watches in order to focus on quartz timepieces in 1989. This led to the creation of the "Squale Rambo." Like many watch companies at the time, Squale began to fade from the international watch market.

After the retirement of Charles von Büren, the Maggi Family, friends to the von Büren family and former distributors of von Büren/Squale watches in Italy purchased the company.The brand relaunched in 2010 and is now headquartered in Milan, with the watches being made in Grenchen in the Jura valley, Switzerland. 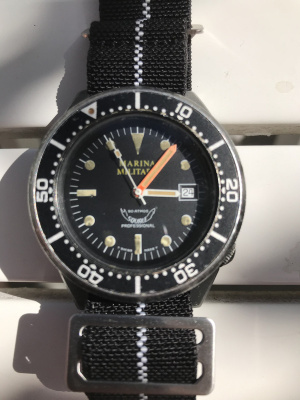 The Marina Militare likely made its first purchase of Squale watches in the late 70s to early 80s. Squale’s watches remained in commissioned use into the 90s. Military records from this time are still in paper form and information about watch requisitions is hard to come by. However, Squale does confirm it provided watches to the Marina Militare during this period. Squale was not an exclusive supplier though – Citizen, Breil, and DPW also provided watches to the Italian Navy in the same era.

There are two primary variations of the Squale Marina Militare. The design closely resembles the brand’s modern reference 1521. Both watches use the ubiquitous ETA 2824-2 movement and are water resistant to 50 atmos, 500 meters, or 1640.42 feet. The most notable difference between the two variations is the case. One version is in stainless steel and the other is PVD coated in black. On the PVD version, the dial reads “Marina Militare” just under 12:00 in capital, yellow letters. The Squale shark logo is above 6:00.

"Squale" is French synonym for the word "shark". Its founder was Charles von Büren .The "von" part of the Squale logo references to the von Büren family and von Büren S.A./Montres.