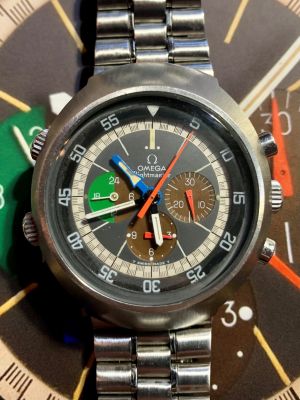 The Omega Speedmaster was introduced in 1957 as a racing chronograph. Through no action of Omega’s marketing department, the watch became a classic in its own time. Omega Speedmasters were discovered by professionals. They were used by pilots and astronauts, receiving the highest honor awarded to a watch; the astronauts would wear their Speedmasters to the moon in the Apollo missions.

How could Omega follow up on this success? In 1969, they released the Flightmaster. This was the first watch made by Omega to appeal specifically to pilots. It was a 44mm hunk of steel shaped into a futuristic styled case that looks like the intake of a jet engine. The case was finished in a distinctive sunburst finish and sported three crowns. It has a blue 12-hour hand that can be adjusted independently to show another time zone simultaneously without having to resort to military time. Its orange chronograph hands could be substituted to cadmium yellow as a no-cost special order option…. yellow shows up better under the infrared cockpit lights of a plane.

For a complicated watch, the Flightmaster is easy to read, thanks to its brilliant information design. Two of its crowns and the pushers for the chronograph were color-coded to the function, leaving no guesswork in operation. The blue crown controls the auxiliary 12-hour hand, the black one rotates the internal bezel and the chronograph pushers are color coded half-red and yellow, to match either set of available hands. Just in case you forgot this was a pilot’s watch, there is a Douglas DC-8 engraved into the back… Based on the massive size and complication, I think it should have been a 747.

The Flightmaster was made in three different references. The first was called the 910. It has a domed mineral crystal and a flatter case profile than its successors. The 9:00 sub-dial is half green and black and is a day-night indicator. Its reference number is 145.013. In 1973, Omega made some revisions to the Flightmaster and renamed it the 911. The 9:00 day/night indicator was replaced with a small seconds hand and the case was made taller for a flat mineral crystal. The first change was to assure pilots that the watch was running and the second one was for increased water resistance. The 911 was made in two different references, 145.026 and 145.036, which revised the crystal gasket from black rubber to a white plastic tension ring. The later 145.036 went from a sunburst finish on the case to a lathed finish of concentric circles.

The Flightmaster shown here is a 1969 910 model. The chronograph pushers immediately identify the watch as as being made in the first half of that year. They have round dimples meant for either yellow or red enamel, depending on the color of the chrono hands. In the second half of ’69, Omega started using pushers with both colors. It’s a small detail that I’ve always liked on these early models. Additionally the chronograph sub-dials have turned “tropical” brown, a result of moisture entering the watch at some point in its life.

Was the Flightmaster a success? They were awarded the government contract to provide watches for the X-33 program, King Hussein of Jordan owned a solid gold one, along with 200 other lucky and flush individuals. In the Apollo Soyuz mission, cosmonaut Alexei Leonov wore a Flightmaster 911… Also many commercial pilots used the Flightmaster in its time. Despite these highlights, the Speedmaster was still the standard for air and space travel and would be for years to come. Made from 1969-1977, the Flightmaster was a flash in the pan.

The 910 and 911 movements are based on the excellent Lemania-made caliber 861 from the Speedmaster. Any watchmaker who knows about mechanical chronographs should be able to service it. Omega thoughtfully produces almost every part for this watch, except for the case, making restoration relatively easy.

The case polish is very important to this watch. The original sunburst finish is stunning and impossible to replicate by anyone other than Omega. Which will take more than 6 months and cost over $1000 for them to restore. Omega also remakes the dial, but without tritium. So if you see SWISS MADE below the 6:00 sub-dial, rather than T SWISS T, you know it has been replaced. The Achilles heel is that Omega will probably replace the dial if they service it, as they wont to work with Tritium dials.

The best bet is to find a nice original one, even with some knocks and patina. These will appreciate over time. The value of one with a replaced dial or an amateur resurface of the case can be a lot lower, but is unlikely to appreciate as strongly.

The 1970’s was a high water-mark for sport watches. Exuberant style, color and mechanical sophistication were the norm. In this rich environment, the Flightmaster stands out. It’s a big, funky complicated watch that you should have in your life. It’s a celebration of a time when air travel was cool and pilots were heroes.

MORE PICS REQUIRED OF 911 AND OTHER VERSIONS