Jim Clark and His Watches 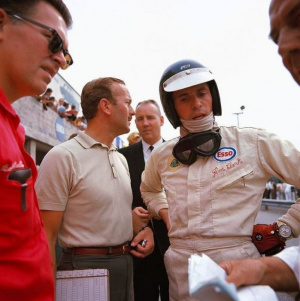 Jim Clark and His Watches

Jim Clark was a versatile driver who competed in sports cars, touring cars and in the Indianapolis 500, which he won in 1965. He was particularly associated with the Lotus marque and won two Formula One world championships with them in 1963 and 1965. Clark was killed in a Formula Two racing accident in 1968 in Hockenheim, West Germany. At the time of his death, aged 32, he had won more Grand Prix races (25) and achieved more Grand Prix pole positions (33) than any other driver.

Jim Clark had a small but impressive collection of well-designed chronographs. Over the years, three pieces from Galet, Enicar, and Breitling have become closely associated with him. 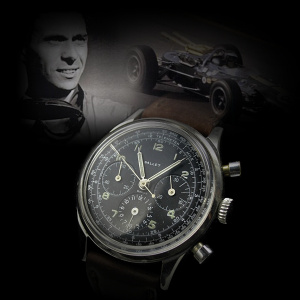 Clark’s Gallet of choice was the Gallet MultiChron 12, which the brand produced using both Valjoux 72 and Excelsior Park “EP40” movements, with choice of either a black or white multi-scale dial. Jim went with black. With its sharp case lines, versatile aesthetic, and highly legible detailing on the dial, the Multichron 12 truly represents everything you could possibly need in a sports chronograph. 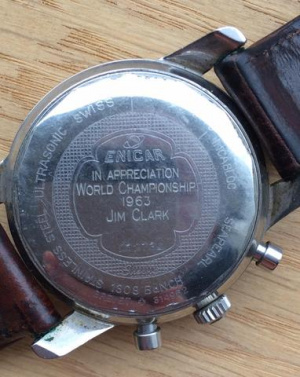 Clark’s sponsorship would change over to another Swiss brand known as Enicar, which similarly to Gallet. During this time, an Enicar Sherpa Graph with a black dial and white sub-registers was worn. Again, this watch made use of the same hand wound column wheel chronograph movement that’s seen in the Gallet, the Valjoux 72.

Jim Clark wore the Enicar Sherpa Graph during his Indy 500 win and gave several to his racing team after winning the World F1 Championship in 1963. 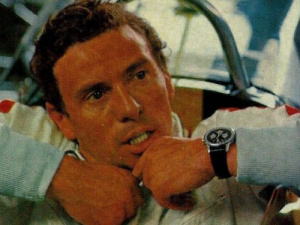 Clark would pick up a Ref. 806 Breitling Navitimer to round out his collection of sports chronographs. He can clearly be seen in photographs wearing the watch throughout the late 1960s, both in the driver’s seat, and on the sidelines at Le Mans.