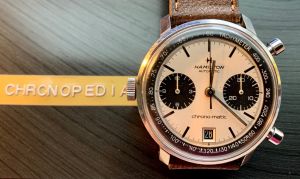 History of the Cal 11

The story of the Chronomatic movement is one example of collaboration between watch companies in Switzerland. The tenor of the industry had changed, as well as consumer tastes by the late 1960s. Manually-powered watches were not as desirable as their self-winding counterparts. Almost everything from dress watches to sports watches were now powered by automatic movements. All except chronographs, that is.

So in 1969, unlikely forces joined together to address that problem. Heuer and Breitling, for a long time fierce competitors in chronograph production, banded together. They enlisted the help of Hamilton and its subsidiary Buren—known for its Intra-Matic calibre—and Dubois-Depraz, who were known for making modular movements.

This spirit of collaboration in pursuit of a common goal was perhaps unprecedented in the industry. While companies had been forced to band together to withstand economic hardship — as Omega, Tissot, and Lemania had to do in the 1930s — Heuer, Breitling, et al joined together simply to create. Each brand relied its own particular strengths to bring forth what was to be a monumental achievement.

In March of 1969, just in time for the Basel Fair, the group announced the completion of their Chronomatic movement. The announcement read:

“At a time when… competition with foreign rivals is growing keener every day, the world launching of the Chronomatic shows the determination and ability of our industrialists to be really competitive… In this spirit, Breitling, Hamilton-Buren, and Heuer-Leonidas, in technical cooperation with the Dubois-Depraz Mechanism Factory Co. Ltd, decided to join forces and resources, in an atmosphere of mutual trust and wholehearted cooperation, in order to plan, produce and distribute under a joint name this new key product of the Swiss watchmaking industry.”

Though Zenith might have jumped the gun with their El Primero movement, presented in January of 1969, the sheer number of models that utilized the Chronomatic ensured its supremacy. Unlike Zenith, who jealously safeguarded their own automatic chronograph movement, granting it only to their subsidiary Movado, the Chronomatic was shared with every member of the group. Though Heuer’s models—particularly the Autavia and Monaco —that carry the movement are perhaps the most well-known, the others merit consideration.

Hailton produced the Chronomatic. Despite the success that the collaboration with Heuer and Breitling brought, in the late 1960s the company from Lancaster, PA wasn’t doing all that well. In fact, by 1966 they had closed their facility in Lancaster and set up shop in Buren’s old factory in Switzerland.

And in 1971 they would be gobbled up entirely by the behemoth that was SSIH, the ancestor of today’s Swatch Group.

In recent years, Hamilton-branded Chronomatic models have gained a newfound popularity, stepping out of the shadow of their Heuer cousins. Maybe its their distinctive colorways, their relative scarcity, or simply the fact that they measure 37mm - not only a perfect size for a sporty chronograph, but perhaps the most wearable execution of the Chronomatic/Caliber 11 movement. Whatever it is, these Hamilton Chronomatics- particularly in "panda" configuration are most desirable. 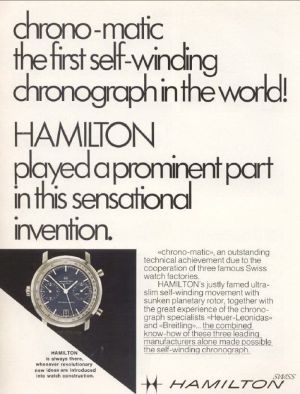