When Accutron 214 based watches were first released in 1960, they were truly ground breaking. Although the Hamilton Electrics had only been released 3 years earlier, the 214 Accutron watches were very different to anything that had gone before — in fact, in one of Bulova’s 1966 advertisements, they have a tag line that says “The Accutron timepiece is not a watch.“. It was the first wristwatch to employ a transistor, it lacked a hand-setting crown on the side of the watch, it made a strange humming sound and it was very accurate. It is no surprise that the 214 “Spaceview” watches were a great success; owners wanted to see this wondrous movement inside their watch.

Here are the main calibres in the 214 Series: 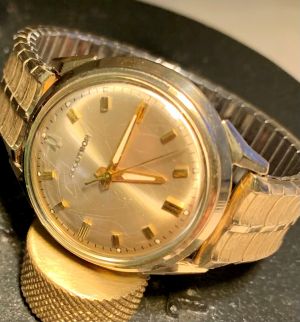 According to Pieter Doenson’s book, from 1968 onwards, the 214 calibre numbering system becomes as shown below. In addition, in the 1960’s, 214 movements were often used in instrument panel clocks — NASA used them in spacecraft — none of the Accutron 214 wristwatches had a calendar function.