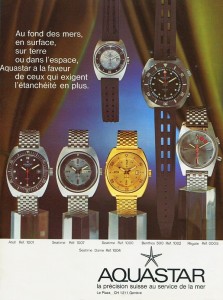 In 1961 JeanRichard SA had filed for a patent for a regatta watch with a 5 minute countdown function. This patent represents the “Birth Certificate” of the regatta yachttimer watches as we still know them today. And somewhere in the mid 1960’s Frédéric Robert (mentioned as inventor in the patent) developed the Aquastar Regate from this patent with a modified Felsa 4000N movement: the first Regatta Yachttimer wrist watch on the market! 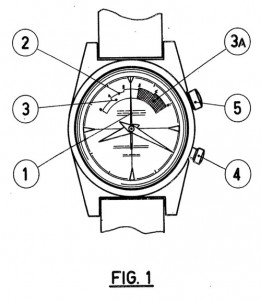 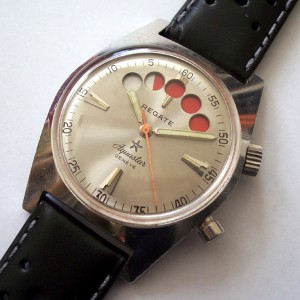 How the countdown function works

The manual wound Felsa 4000N movement with regatta modification, has the crown to set the time at 2 o’clock and one pusher at 4 o’clock for start/reset. Under the dial lays the indicator disk coloured silver (as the dial) with a red section for counting the minutes. There are five round holes cut out of the dial, between 10 and 2 o’clock.

After a reset the five dots colour red and the sweep second hand return to 60 (0). By releasing the pusher the countdown timer starts and the sweep hand is set in motion counting the seconds backwards from 60 to zero. After one minute the first dot changes to silver, another four minutes to go. After 5 minutes all dots are silver and the regatta starts. The indicator disk stops but the second hand will run as long as the movement is wound enough. 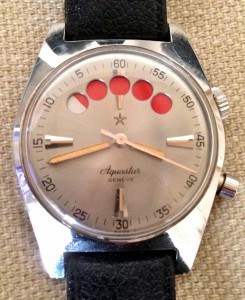 The first Regate Aquastar used the same case design as several other models (Airstar, ’60, ’63, etc). The star-pattern on the caseback is unique to Aquastar, and the caliber number is always written on the caseback under the serial number.