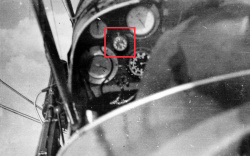 watch attached to instrument board in cockpit of WWI aircraft

The Royal Flying Corps was established in April 1912, incorporating the Air Battalion of the Royal Engineers, whose observation kites and balloons and fixed wing aircraft helped to form the basis of the Military Wing. The Naval Wing quickly evolved into the Royal Naval Air Service, which was established as a separate entity on 1 July 1914 under the control of the Admiralty.

This separation of air power, which was never particularly clear cut or intuitive, continued throughout the war, with both organisations often competing for the same resources. Various attempts were made to cure the dysfunctional situation that had arisen, especially in relation to supply, culminating in the establishment, on 1 April 1918, of the Royal Air Force as a third arm, separate from both the Army and the Navy. The Royal Flying Corps and the Royal Naval Air Service were both disbanded.

Until 1918, the Admiralty developed its own requirements for an aviation watch and procured the Admiralty Type I and II. The War Office, on the other hand, acquired the Mark IVA watch to meet a specification drawn up by the Royal Aircraft Factory. This was followed towards the end of the war by the 30-hour Mark V watch, which was probably procured under the umbrella of the short-lived Air Board, c 1917.

The archetype for British aviation watches was established from the start:

Nomenclature to the dial

The dials carried as a minimum the name of the supplier and the specification that it met (eg Mark IVA).

Individual serial numbers were applied from the Mark IVA onwards and incorporated a letter code that identified the supplier. It was British standard practice during WWI to mark military equipment supplied under contract in this way.

The Mark V watches did not carry manufacturer’s names to the dial, but they are identified by their digraphic letter codes (and branding did appear to the movements, cuvette, inner case back, etc).

The Admiralty issued both luminous and non-luminous versions of their aviation watch.

The Royal Aircraft Factory started to issue luminous versions only from 1917 onwards.

The A ↑ D mark is painted to the dial of Admiralty Mark I and Mark II watches and probably denotes the Air Department of the Admiralty. ZMW [p 30] prefers ‘Admiralty Department’.

An ‘A ↑ S’ mark appears only on one watch: a Mark IVA supplied by S. Alexander & Son Ltd. The mark may simply be supplier's branding (A & S) rather than a service designator. ZMW [p 12] attributes this mark to the Royal Naval Air Service c. 1914 (‘Air Service’), however.

The ‘Air’ Mark (A [underline] ↑] was applied to all Mark V watches (and to a very late version of the Mark IVA supplied by H. Williamson Ltd). The use of this mark may reflect the reorganisation of war effort that led to the creation of the Air Board in 1917. However, ZMW [p 12] prefers ‘Aviation’.

The Air Ministry mark (A.M. with King’s Crown surmounted), which was used from the inter-war period until c 1944, occasionally appears in addition to one of the other marks, indicating retention in stores after WWI. These watches sometimes have ‘G.S. Type’ applied to the dial, indicating a General Service watch that in RAF usage was assigned the 6E/50 stores reference.

The War Department (W.D.) mark (W ↑ D) was applied to the Mark IVA watch until that mark was cancelled in 1917. At least three different designs were employed: an elaborate decorated version that occupied the whole of the flat portion of the case back; a much smaller, simple, stamped version that is the more common usage seen in surviving examples; and a slightly larger, boldly-engraved version of the simple style is also seen, perhaps confined to early issue watches.

Although the War Department became the War Office in 1857, the name remained in use for certain purposes.

The Admiralty Mark I and Mark II had sterile case backs, apart from one version of the Mark II that was supplied by Thos. Armstrong & Bros, Manchester (which had a unique stamped ‘arrow’ design). Presumably the nomenclature that appeared on the Mark I and Mark II watch dials was considered sufficient for most purposes

Before the 30-hour Mark V standard was formulated, the British aviation watch used a variety of Swiss 8-day movements.

For a while, Georges Favre Jacot et Cie of Le Locle (better known today as Zenith) supplied a Mark IVA watch with a movement of this design marked with its own BILLODES trademark. (Later examples were marked Octava in the standard manner).

All Octava movements have serial numbers stamped to the base plate near the balance wheel.

This unattributed 8-day movement was used by various contractors to supply the Mark IVA watch.

This movement was supplied uniquely by H Williamson Ltd London for the Admiralty Mark II and Mark IVA watches.

The movement, attributed to Eterna, is entirely different to the 7-jewel Astral movement that Williamson used for its General Service watches supplied to the British Army during WWI.

Serial numbers are stamped to the base plate near the balance wheel.

The main movement plate has +7032 stamped to its edge, denoting a Swiss patent granted in 1893 to Amédée Douard (pere) of Bienne, Switzerland.

The movements have serial numbers stamped to the dial face of the base plate, which is usually inaccessible.

The Admiralty Mark I 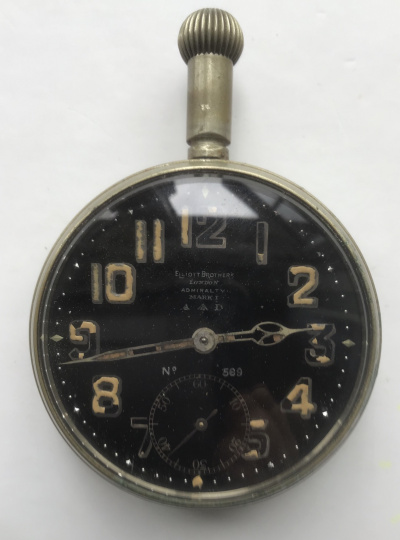 All Admiralty Mark I watches seen to date were supplied by Elliott Brothers, London, and it seems likely that they were the only contracted supplier.

The Admiralty Mark I appeared in both a luminous (black dial) and a non-luminous (white dial) version, the latter appearing first (numbers in italic). The black dial was gloss with diamonds and pearls chapter markings (block numerals outlined in gilt, filled with radium).

Admiralty Mark I case backs were sterile, presumably because the nomenclature on the dials was considered sufficient.

Elliott Brothers was a supplier of scientific & technical instruments with a famous reputation. They were established in the 19th Century and held important contracts with the Admiralty, and later the War Office. The company was very entrepreneurial, developing, for instance, an Engine Revolution Indicator for automobiles that was easily adapted for use in aircraft.

In 1916 the company was registered as a private limited company and became styled as Elliott Bros (London) Ltd.

The Elliott instrument board 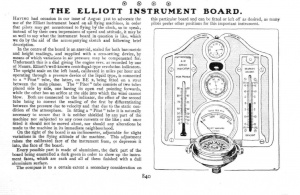 Elliott Brothers produced a very early full instrument board which Flight noted to be fitted to the BE2 at the first military aircraft trials in 1912. The journal advocated the use of the Elliott instrument board on all flying machines ‘in order that pilots may get accustomed to flying by the clock, so to speak, instead of by their own impressions of speed and attitude’.

The board was made of aluminium and comprised: an aneroid (scaled for both barometric and height readings), an Engine Revolution Indicator, an Air Speed Indicator, an Ascent-Descent Indicator (inclinometer), and, surmounting all, a clock.

Photographic evidence argues against the Elliott Admiralty watch being supplied with this board - the dimensions appear to be closer to those of an instrument with clock works - but the connection is interesting.

The Admiralty Mark II appeared in both a luminous (black dial) and non-luminous (white dial) version. S. Smith & Sons (M.A.) Ltd supplied both versions. Thos. Armstrong & Bro supplied only the luminous version but the dial was rendered in two styles: (a) a gloss black version with diamonds and pearls chapter markings (as used in the Admiralty Mark I; (b) a matt black dial with block numerals in white relief (filled with radium).

For most of WWI, the standard British military issue was a 7 jewel pocket watch, supplied by established firms like H Williamson, H White, and W Ehrhardt. All but the Ehrhardt were cased by Dennison (Ehrhardt being an established case maker in its own right).

Once the USA came on board, 7 jewel Elgin pocket watches were supplied also, c 1917.

Watches issued to the Royal Artillery need to be considered separately because they were entirely different (eg some hacked).

A Corporal of the Border Regiment wounded in the Somme battles of July 1916 mentions his issued pocket watch in an IWM interview: I can remember an RAMC man looking at me and saying: 'He won't live long...' and he took my watch out of my breast pocket - my official watch, suspended on a leather strap. Royal Army Medical Corps? Royal Army Robbing Corps more like!. To be fair to the maligned, removal of valuable officially issued items may have been a standing order in those circumstances.

Some trench watches bear the unmistakable signs of issue to the British Armed Forces: a broad arrow marking and/or an engraved alphanumeric sequence (an ‘issue number’). Genuine examples of these watches are rare, and reliable information about them scarce.

The starting point for most discussions of WWI British military-issued wristlets is ZMW [p 60]. This short but troublesome text states that:

Although I would challenge the first and last of these statements, a neat scheme is suggested whereby issued wristlets can be categorised according to whether their cases were of a snapback or screw back design, viz.