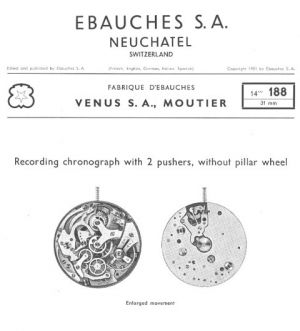 Venus was a well-known movement producer in Switzerland in the 1920’s and was one of the very first movement manufacturers to create a chronograph equipped with a column wheel to control the central hand. Over the year’s, Venus’ success continued to intensify and they became widely known as one of the best chronograph manufacturers in the world.

Unfortunately, it wasn’t long before the cost of manufacturing column wheel-based movements began to rise and so to stay competitive with other mechanical movement producers, Venus had to start designing cheaper, more cost-effective movements. Some of their cheaper calibres included the 188, 200, 210 and 211 which used a cam switching mechanism rather than the column wheel mechanism in their 175, 178 and 179 calibres. Sadly, it didn’t take long for Venus to begin struggling with this change and eventually mechanical manufacturer rival Valjoux absorbed the company in 1966.