The Rolex Submariner and James Bond 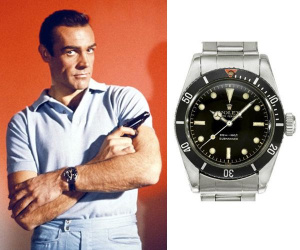 Ian Fleming, the author of the James Bond book series, stated about the spy:

And so it was, in the first films too. The Rolex Submariner was featured in a number of James Bond movies and on the wrist of Sean Connery in “Dr. No”, the very first film about the British Secret Service agent.

If there were a Holy Grail of movie watches, the Rolex Submariner reference 6538 worn by Sean Connery in the first few Bond Films is a likely contender. With a tight budget and no help from Rolex during production on Dr. No, producer Cubby Broccoli supposedly gave Connery the watch off of his own wrist — and it ended up becoming a legendary timepiece. Today, the average 6538, which is not very easy to find, can fetch six figures in the right condition. But the real deal, purportedly owned by the Broccoli family, is likely priceless.