The Rolex Oyster and Tenzing Norgay 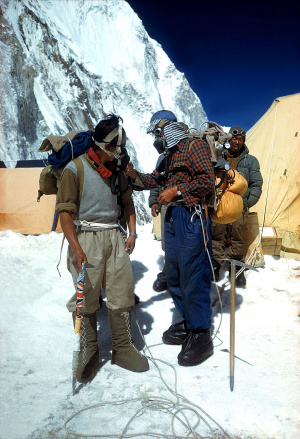 Tenzing Norgay and other members of the Hunt expedition wore Rolex Oysters in 1953 on Mount Everest but the only watch that Hillary wore to the summit was a Smiths De Luxe (currently on display at the Clockmakers' Museum within the Science Museum, London). Both Rolex and Smiths had claimed to the first to the summit and while feasible (eg if Hillary and/or Tenzing had carried both or if one had a Smiths and the other a Rolex) it was later admitted by Mr. R. A. Winter, Director of the Rolex Watch Co., Ltd that Hillary was only wearing one watch at the summit, "and that a Smiths watch." He goes on to congratulate Smiths "on the fact that their Smiths de Luxe ordinary wind wrist watch reached the summit with Sir Edmund Hillary."

As an aside to the Rolex vs Smiths acrimony that developed (and persisted) after the ascent, Smiths' D W Barrett declared in the 'Horological Journal' that autumn that "there is advertising and there are facts"!