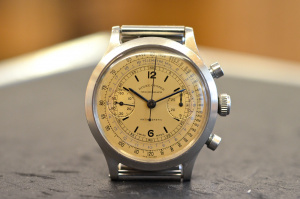 By the start of World War II Royal Air Force pilots were buying Rolex watches to replace their inferior standard-issue watches. However, when captured and sent to prisoner of war (POW) camps, their watches were confiscated. Hans Wilsdorf of Rolex heard of this and offered to replace all watches that had been confiscated and did not request payment until the end of the war. The officers would write to Rolex and explain the circumstances of their loss and where they were being held. Wilsdorf was in personal charge of the scheme.

An estimated 3,000 Rolex watches were ordered by British officers in the officer camp Oflag VII-B in Bavaria alone. This had the effect of raising the morale among the allied POWs because it indicated that Wilsdorf did not believe that the Axis powers would win the war. American servicemen heard about this when stationed in Europe during WWII and this helped open up the American market to Rolex after the war.

On 10 March 1943, while still a prisoner of war, Corporal Clive James Nutting, one of the organizers of the Great Escape, ordered a stainless steel Rolex Oyster 3525 Chronograph (valued at a current equivalent of £1,200) by mail directly from Hans Wilsdorf in Geneva, intending to pay for it with money he saved working as a shoemaker at the camp. The watch (Rolex watch no. 185983) was delivered to Stalag Luft III on 10 July that year along with a note from Wilsdorf apologising for any delay in processing the order and explaining that an English gentleman such as Corporal Nutting "should not even think" about paying for the watch before the end of the war. Wilsdorf is reported to have been impressed with Nutting because, although not an officer, he had ordered the expensive Rolex 3525 Oyster chronograph while most other prisoners ordered the much cheaper Rolex Speed King model which was popular because of its small size.[80] The watch is believed to have been ordered specifically to be used in the Great Escape when, as a chronograph, it could have been used to time patrols of prison guards or time the 76 ill-fated escapees through tunnel 'Harry' on 24 March 1944. Eventually, after the war, Nutting was sent an invoice of only £15 for the watch, because of currency export controls in England at the time. The watch and associated correspondence between Wilsdorf and Nutting were sold at auction for £66,000 in May 2007. Nutting served as a consultant for both the 1950 film The Wooden Horse and the 1963 film The Great Escape. Both films were based on actual escapes which took place at Stalag Luft III.