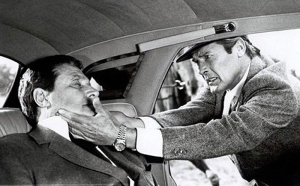 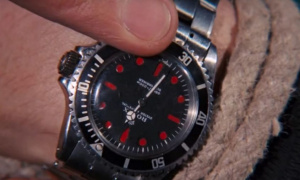 Roger Moore made his Bond debut in Live and Let Die. When the film starts, he checks the time on a Hamilton Pulsar P2 digital LED watch, before getting his Rolex Submariner 5513 back from Q Branch. We get to see one party piece of the watch straight away, when Bond activates the magnet and M’s teaspoon gets stuck to the watch. Later in the film, to get out of trouble, Bond uses the magnet feature and the second feature of the watch, a circular saw, which causes the whole dial and bezel to spin, cutting the ropes around Bond’s wrists.

The Rolex might have been the star prop of the film, but there was another, less well know watch the got some screen time on Sir Roger Moore’s wrist.

Towards the end of the film, James tries to use the magnet in his 5513 to get a boat and escape from the Tee-hee’s crocodile swamp. Unfortunately the boat is tied to a rope, so Mr Bond decides to use the crocodile’s backs as a bridge and run across them to safety. James eventually jumps into a speedboat and gets chased by the bad guys in the Louisiana bayous. This is where the Submariner gets turned into a different watch, a Tissot Seastar PR 516. This watch was most likely Sir Roger Moore's personal watch which he forgot to change before getting in front of the camera.

The Man with the Golden Gun

The Reference 5513 Sub is again the watch of choice for 007, but doesn’t feature any gadgets this time.

The Spy Who Loved Me

A change of direction in timepieces, with Bond wearing a digital watch from Seiko. This was a sign of the times, as the 1970s saw the rise of quartz timepieces and digital watches. The only gadget this watch features is a ticker tape messaging system. 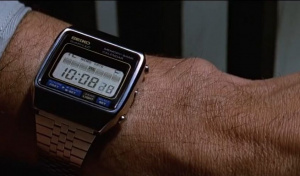 In Moonraker, a more complicated Seiko is on the wrist of Roger Moore and it features an explosive charge hidden in the back of the watch.

For Your Eyes Only

The H357 Duo-Display from Seiko was the watch selected for the thirteenth Bond film. It featured an analogue time display along with a digital display which was used to transmit messages along with a built-in microphone to communicate with 007.

A digital sports chronograph. The extra feature added by Q Branch is the ability to keep tabs on a planted tracking device indicated by the red dot.

A View to a Kill 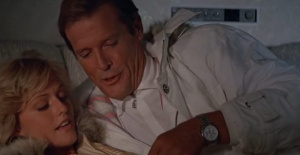 This was Roger Moore’s last film as James Bond and he wore four different watches. The first was the Seiko SPR007 7A28-7020, a white-dialled quartz chronograph seen at the start of the film. The second watch was a Seiko H558-500 SPW001 Dive Watch and can be seen briefly when Bond is chasing someone up the Eiffel Tower. The third Seiko was 6923-8080 SPD09, a two-tone watch, which is seen for the briefest of times underneath Bond’s shirt cuff. A Rolex Datejust is seen on Bond’s wrist when he finds his driver dead.