The Patek Phillipe and The Driver

The Patek Phillipe and The Driver 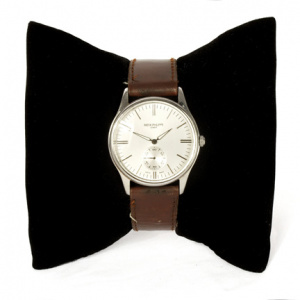 This Patek Philippe watch was worn by the character “Driver” portrayed by actor Ryan Gosling in the 2011 motion picture “Drive”. The screen used prop watch with white luminous hour and minute hands and second stopwatch below was custom made for use on the production and is attached to a brown leather band.

This was Driver’s signature watch used throughout the film, and appeared notably in the opening sequence when he places it on his steering wheel to time one of his five-minute getaway jobs. The scene was also included in an official trailer for the movie.

In an article featured in GQ Magazine (UK), Prop Master Will Blount provided details on the custom made watches created for the film, saying "In the original book by James Sallis, Driver didn't own an awful lot. One of the things he did own was this beautiful watch that he had been given by his father. So it was an important for the character that it be something memorable, something iconic."

This is a prop however - it was never available in real life from Patek, although 6 copies were made for the film and have come up for sale since. Ryan Gosling owns one of them.