The Heuer Monaco and Steve McQueen 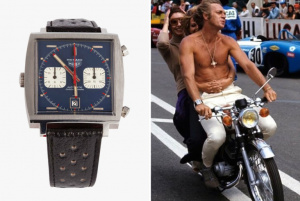 McQueen was at the height of his career and he was chosen to star in Le Mans, a motor racing drama which introduced the King of Cool to the Heuer Monaco. His props master Don Nunley pointed out that McQueen had chosen a Heuer patch on his white Nomex race suit and subsequently gave McQueen four Heuer watches to choose from. McQueen chose the most unusual piece out of the bunch – the ‘McQueen Monaco’ model 1133B.

Although the Monaco received all the screen time, a number of on set photos reveal McQueen’s true personal preference as his Submariner reference 5512. However, his mark had already been made, and the Monaco owes its provenance to him.